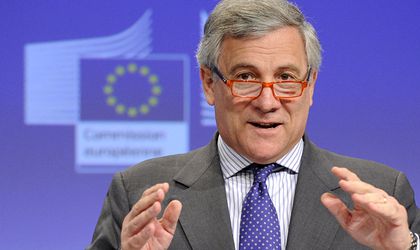 PM Vorica Dancila met with the President of the European Parliament, Antonio Tajani today, and held a press conference at the end of their meeting.

Tanjani said: “I had a long meeting with PM Dancila, our former colleague. I underlined the importance of the Romanian presidency in the EU Council for the adoption of the multiannual financial framework. The Parliament insists on the final approval of the MFF before the European elections, and we count on the collaboration with the Romanian presidency.

We also spoke about the need for the EU budget to increase, but not out of the citizens’ pockets, but by taxing the digital economy. Another thing we discussed was Brexit. The EP vote will mean the end of this process and the collaboration with the Romanian presidency will be extremely important here as well. It will also have an important role in the process of integrating Balkan countries.”

PM Dancila said: “I was in total agreement with Mr Tajani regarding the growth of the EU budget while supporting the cohesion policy and the common agricultural policy. I think a good cooperation is beneficial for Romania, for Europe, and the fact that my first official visit was here in Brussels shows the European approach I want for my government.”