EU leaders adopt the Sibiu Declaration: “We will continue to protect our way of life, democracy and the rule of law” 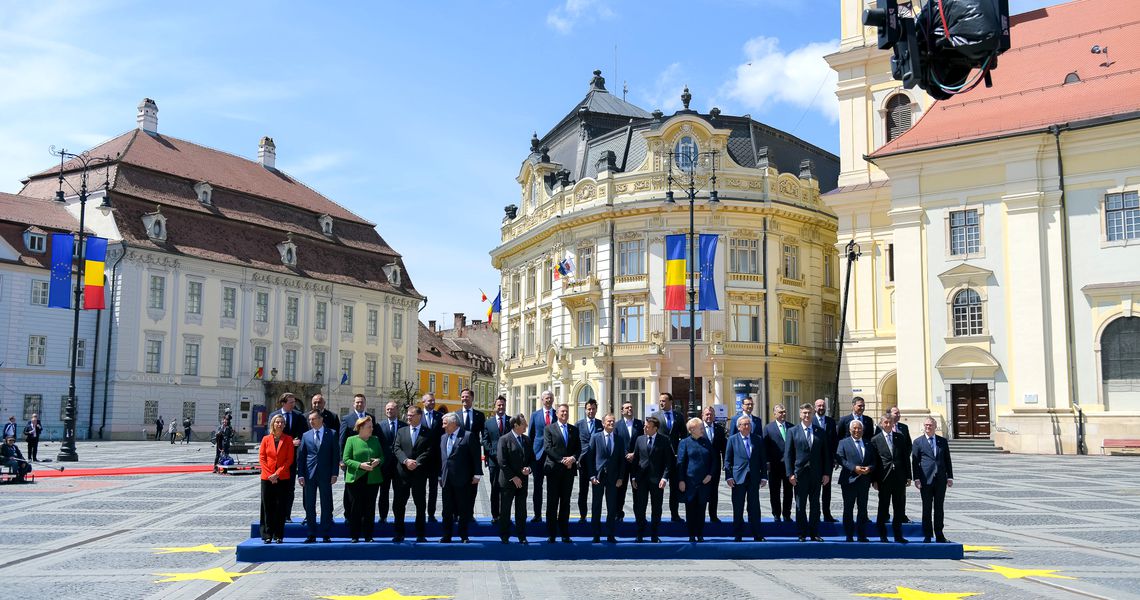 The 27 European Union leaders gathered in Sibiu, southern Transylvania, to discuss and look ahead to the future of the union have adopted on Thursday a 10-point “Sibiu Declaration”, stating that the member states will continue to protect “our way of life, democracy and the rule of law.”

The summit is officially hosted by Romanian President Klaus Iohannis and chaired by Donald Tusk, the President of the European Council.

Also attending are heads of state and government from EU member states, European Commission President Jean-Claude Juncker, and the President of the European Parliament, Antonio Tajani.

EU leaders have discussed the EU’s next strategic agenda for the period 2019-2024. They have exchanged views on the challenges and priorities for the EU for the years to come.

We, the Leaders of the European Union, have gathered in Sibiu to discuss and look ahead to our common future.

In a few weeks, Europeans will elect their representatives in the European Parliament, forty years after they first exercised this fundamental right. A Europe re-united in peace and democracy is but one of many achievements. Since its inception, the European Union, driven by its values and freedoms, has provided stability and prosperity across Europe, within and beyond its borders. Over the years, it has grown into a major player on the international scene. Gathering around half a billion citizens, with a competitive single market, it is a leader in worldwide trade, and shapes global politics.

We reaffirm our belief that united, we are stronger in this increasingly unsettled and challenging world. We recognise our responsibility as Leaders to make our Union stronger and our future brighter, while recognising the European perspective of other European States. That is why today we unanimously agree on 10 commitments that will help us live up to that responsibility:

We will defend one Europe – from East to West, from North to South. Thirty years ago millions of people fought for their freedom and for unity and brought down the Iron Curtain, which had divided Europe for decades. There is no place for divisions that work against our collective interest.

We will stay united, through thick and thin. We will show each other solidarity in times of need and we will always stand together. We can and we will speak with one voice.

We will always look for joint solutions, listening to each other in a spirit of understanding and respect.

We will continue to protect our way of life, democracy and the rule of law. The unalienable rights and the fundamental freedoms of all Europeans were hard fought and will never be taken for granted. We will uphold our shared values and principles enshrined in the Treaties.

We will deliver where it matters most. Europe will continue to be big on big matters. We will continue to listen to the concerns and hopes of all Europeans, bringing the Union closer to our citizens, and we will act accordingly, with ambition and determination.

We will always uphold the principle of fairness, whether it be in the labour market, in welfare, in the economy or in the digital transformation. We will further reduce disparities between us and we will always help the most vulnerable in Europe, putting people before politics.

We will give ourselves the means to match our ambitions. We will provide the Union with the means necessary to attain its objectives and carry through its policies.

We will safeguard the future for the next generations of Europeans. We will invest in young people and build a Union fit for the future, able to cope with the most pressing challenges of the 21st century.

We will protect our citizens and keep them safe by investing in our soft and hard power and by working with our international partners.

Europe will be a responsible global leader. The challenges we face today affect us all. We will continue working with our partners in the world to uphold and develop the rules-based international order, to make the most of new trading opportunities and to jointly tackle global issues such as preserving our environment and fighting climate change.

The decisions we take will follow the spirit and letter of these 10 commitments. The Union of today is stronger than that of yesterday and we want to continue to build its strength for tomorrow. This is our commitment for the future generations. This is the spirit of Sibiu and of a new Union at 27 ready to embrace its future as one.