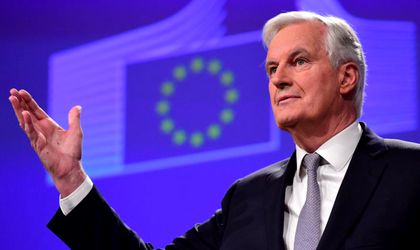 As the UK and EU have pledged to work on breaking the deadlock in Brexit talks during the summit taking place in Salzburg this week, the European Union’s chief Brexit negotiator, Michael Barnier, has repeated his offer of re-writing the blueprint for avoiding a hard border between the UK and Ireland, an issue that has help up negotiations progress since March, according to Bloomberg.

PM Theresa May initially rejected Barnier’s plan because it meant that Northern Ireland would remain a part of the EU’s customs territory.

On Wednesday in Salzburg, May will reiterate her message that carving out a piece of UK territory is off the table, but she is committed to finding a way to an agreement if better terms are proposed.

“Our proposal for the backstop for Ireland and Northern Ireland has been on the table since February,” Barnier told reporters in Brussels on Tuesday. “We are ready to improve this proposal.”

Barnier warned May that substantial progress needs to be made by next month in order to strike a deal in time for the March 2019 “Brexit day”.

“October will be the moment of truth,” Barnier said. “It’s then we will see whether the agreement we’re hoping for will be within our grasp.”

At the gathering in Salzburg, leaders are expected to discuss holding an extra summit in November to sign off on the Brexit agreement.

Besides the Ireland issue, the two sides need to outline their future economic, trade and security relationship. May wants to stay close to the EU for trade in goods, but be independent on services, while the EU says this wouldn’t work because its single market is indivisible.