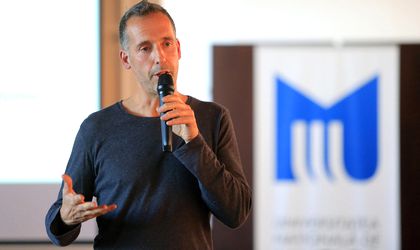 At this edition of the Enescu Festival, a premiere took place: thirty of the most influential contemporary composers of the moment participated in debates on music issues within a unique event, the International Forum of Composers, coordinated by Romanian composer Dan Dediu. BR attended the lecture of composer, pianist and conductor Graham Fitkin, who talked about reconnecting with audiences in an attempt to grasp new perspectives of the contemporary music universe.

If you search for Graham Fitkin on the internet, most reviews describe his music as eclectic, as I found out during the Forum of Composers. For example, Sound Scotland publication wrote that “Graham Fitkin always manages to maintain his own distinctive style of composing, even when he embraces an amazingly eclectic range of influences. Jazz, Latin American, early music, classical piano and electro-acoustic all had their part to play in Fitkin’s dazzling cavalcade of musical thrills (…). His all-star ensemble thrilled the audience with a performance that brought wonderful new sounds to more traditional forms.” So he is more than hooked in the current century, although classical music could be seen as something very sophisticated and hard to understand.

In his lecture, Graham Fitkin first explained the importance of the framework. “I ask why me. (…) Then I start to write a piece of music.” He also underlined the question of who paid for the composition, just because it’s very important to understand the whole picture. “We should ask that. I want to be sure that the relationship with the person/institution who paid me is completely honest and I want them to understand my type of music and be ok with that. If not, they should find someone else,” explained the British composer.

Furthermore, practical questions like what the venue looks like and who is the audience should be asked in order to set the complete framework. A wrong venue can kill a piece of music, while the details about the audience can offer you some creation tips.

“The act of listening tends to be so difficult these days because we are used to multitasking. When was the last time you saw someone sit there and do nothing? It’s very rare,” argues Fitkin. And he is totally right. “We should talk about connection, first of all. As a composer, when you listen to a piece of music, there’s a relationship going on. (…) You come to a concert hall, you listen to my music, you liked it or you hated it, it doesn’t matter, it’s still a relationship. But that relationship is based on all sorts of things, and starts with the question ‘why did I compose this piece of music’,” adds the composer.

And this is where the term “reconnection” pumps in, while it’s quite difficult to connect and do a single job – which in this case is listening to a piece of music. “I want to respect the listener, but also potentially challenge him/her,” concludes Graham Fitkin.