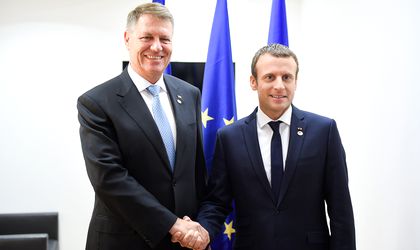 The French president Emmanuel Macron will come in Romania on August 24 to meet with president Klaus Iohannis.

The discussions that will take place at Cotroceni Palace will focus on the development and thoroughness of the bilateral relation of strategic partnership, as well as the main subjects on the European agenda, international and security. At the end of the meeting, the two presidents will support a common press conference, says the presidential administration.

The visit was agreed in the context of the meeting of the two presidents during the European Council meeting from June 23, when Macron accepted the proposal of the Romanian president to continue the dialogue in Bucharest, according to News.ro.

After the meeting from June 23, which lasted for 30 minutes, Iohannis said that it “was very, very good”.