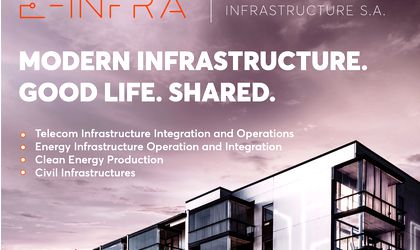 Electrogrup Infrastructure recorded a turnover of EUR 107.5 million in 2017, up 39 percent compared with the previous year, while its consolidated operational profit (EBITDA) increased by 38 percent to EUR 22.57 million, financial data show.

“The future will bring more and more technology into our lives. Companies that apply or develop technology will be the winners of the markets. Infrastructure is the backbone on which technology is developed and run. They function together to satisfy people’s needs. Our group of companies builds and invests in modern infrastructure in multiple industries, through various alliances and partnerships”, says Teofil Muresan, Founder and E-INFRA’s Chairman of the Board.

The main activity of the group resides in the infrastructure sector. The companies cover two business verticals: owning and operating a diversified infrastructure as well as building infrastructure for other operators or investors.

The creation of the E-INFRA holding company at the end of 2017 aims both to capitalize on the opportunities generated by the need for modern infrastructure in almost any field and to facilitate operating as an integrated, optimized, and competitive group in a solid cross-sector platform.

Electrogrup Infrastructure aims to raise capital for organic growth in its areas of operation and to continue making acquisitions in Romania and other countries.