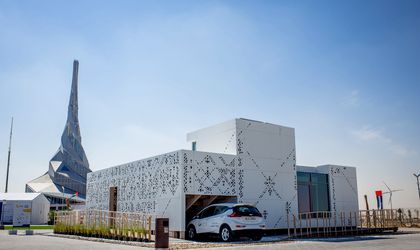 Romanian team EFdeN is the world’s vice-champion at the first trial of the Solar Decathlon, Engineering and Construction. The international competition of solar homes takes place during this period in Dubai.

Romania will compete against 14 other teams from 11 countries and 4 continents, including the Netherlands, USA, Australia and Middle Eastern countries. The competition involves designing and building smart, environmentally-friendly solar homes that adapt to climate conditions in the Middle East. This year’s edition is being held from 29 October to 29 November in Dubai, with all 15 houses being visited by those interested. The Engineering and Construction trial aimed to evaluate the construction and systems involved, innovation, integration and implementation. The teams had to demonstrate a high level of structure, electrical, mechanical and equipment choices.

The evaluation was carried out by an international jury consisting of specialist engineers who evaluated the teams during the two years and the presentations they held on the competition site, focusing on the students’ involvement in the solutions and on the simulations carried out during the construction of the house in Romania.

The EFdeN Signature House was built entirely by the students in the EFdeN team, as a Romanian research and innovation project. The Engineering and Construction test is the first of 10, 6 being judged, and 4 monitored through prototype performance over 10 days.

In just 14 days, the EFdeN team of 33 students from Ion Mincu University of Architecture and Urbanism, Bucharest Technical University of Engineering, Bucharest University and Polytechnic University, assembled the prototype EFdeN Signature in Dubai, being among the first teams to complete house in the pre-competitive stage.

Between November 18 and 28, the 15 finalist teams will compete in the monitored and judged samples. The monitored samples represent 40 percent of the final competition score and require testing of the house in terms of energy efficiency, comfort and functionality, while the judged evidence is the support and argumentation of the project in front of an international jury made up of specialists from each field.

Homes can be visited daily on the competition site by registering on the competition website. In order for the team to be present in Dubai for 45 days, the young team members launched the Romanian Innovation Support campaign, which raised 70 percent of the necessary funds.

The Solar Decathlon is the most important sustainable housing competition in the world and was born in 2002 in the United States of America. In 2012, the PRISPA team was the first team in Romania to qualify for the Solar Decathlon (Madrid edition), and in 2014 the EFdeN team participated in the Versailles edition of the house, which is now the Congressional Research Center.