Economy minister: Romania will host the regional center of fitting and maintenance of Black Hawk helicopters 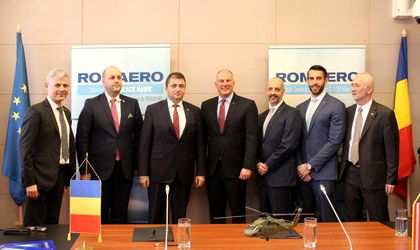 The companies Romaero and Sikorsky, part of Lockheed Martin group, signed this Wednesday an industrial partnership, according to a release of the minister of Economy. The industrial partnership ensures the participation on the long-term of several companies from the Romanian defence industry on assembly, fitting , customization and maintenance works of the helicopter Sikorsky UH-60 Black Hawk, according to Mediafax.

The Bucharest center will be the only one authorized by the Lockheed Martin group for the fitting and maintenance of Sikorsky UH-60 Black Hawk helicopter in Central Europe.

The partnership was signed in the presence of the Economy minister, Danut Andrusca, of the president of Defence Commission from Deputies Chamber, Dorel Caprar, as well as in the presence of representatives of USA Embassy at Bucharest.

„The agreement signed today represents a confirmation of the Romanian industry potential, that is able to make products with high added value. We are waiting to see which will be the concrete economic effects of this agreement and how fast will be felt at the level of Romanian industry and economy. The Ministry of Economy will support the initiatives of the subordinated companies that can lead to relaunch of industrial activity. At the same time, this agreement is a confirmation of the good relations and the strategic partnership between Romania and USA,” said Andrusca.

„Our ability to supply the most capable helicopter in the terrestrial fight (AsuW) and anti-submarine (ASW) could offer Romania, at the most competitive price, the coverage necessary for the important strategic position that it has at the Black Sea,” said Eric Schreiber, Vice-president Sikorsky.

Romaero will do whatever is necessary to ensure the success of this project from Turkey to Poland.

Photo courtesy: The Ministry of Economy