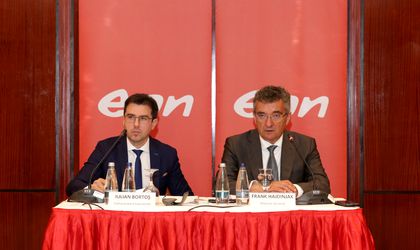 Natural gas and electricity provider E.ON has invested some RON 433 million (EUR 97 million) locally during 2015, according to the company’s financial results. This is the largest sum over the last years, while this year’s budget includes expenses close in value to the ones of 2015.

With a consolidated turnover of RON 4.9 billion (EUR 1.1 billion) last year, company representatives expect it to surpass RON 5 billion in 2016. The company sold natural gas and electricity amounting to 28.4 TWh.

A large share of the 2015 investments went into the rehabilitation and modernization of distribution networks for gas and electricity, which will continue to be a priority for the company in the future, according to E.ON Romania’s general director, Frank Hajdinjak.

Some RON 160 million (EUR 36 million)  have been spent on the rehabilitation and upgrading of the natural gas distribution system, which has been extended over a length of 150 kilometers. This year’s budget targets over RON 190 million (EUR 43 million) in investments for the modernizing of about 500 km of pipelines and extension of 150 kilometers of piping distribution system.

On the electricity segment E.ON spent RON 240 million (EUR 54 million) in 2015, the highest sum yet since taking over the distribution of electricity in Moldova in 2005. The main objectives were envisaged implementation of SCADA (Supervisory Control And Data Acquisition), smart metering, upgrading of transformer stations, rehabilitating and securing electricity networks, especially those of low voltage. For the current year investments are budgeted at a level similar to that of the previous year. Since its entry to the market in 2005 E.ON has invested over RON 5 billion and paid taxes amounting to RON 7 billion. It has also invested some EUR 9.3 million into social responsibility projects, of which EUR 1.6 million only last year.