DTZ Echinox: almost half the modern retail surface in Bucharest, concentrated in Sectors 3,6 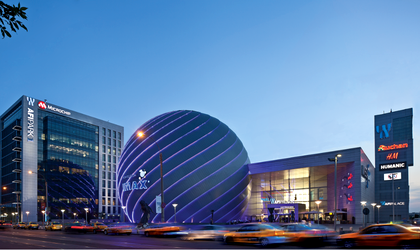 Almost half the modern retail surface in Bucharest is found in Sectors 3 and 6, a study by DTZ Echinox shows. The stock of modern retail in Bucharest totaled last year 1.225 million sqm, after developers completed two new commercial centers with a total GLA of around 100,000 sqm.

At the end of 2016, the modern retail stock in Bucharest stood at 1.225 million sqm. Sector 6 continues to hold the biggest surface of modern retail spaces in Bucharest (301,000 sqm), followed by Sector 3, with 270,000 sqm. The biggest retail project delivered last year is Parklake Plaza (69,000 sqm). The occupancy of retail projects in Bucharest at the end of 2016 stood at 96 percent. The average density of modern retail spaces in the Capital reached 650 sqm/1,000 inhabitants, the highest level being recorded in Sector 1 (967 sqm/1,000 inhabitants). In 2017, AFI Palace Cotroceni will be extended. Premium rent in Bucharest stands at EUR 70/80/sqm per month.

Bucharest’s Sector 6, comprising Militari, Crangasi and Drumul Taberei, continues to offer the biggest surface of modern retail spaces in Bucharest, reaching a cumulated stock of 301,000 sqm at the end of 2016, according to the Bucharest Retail Market study made by DTZ Echinox.

Sector 3 comes second (Titan, Vitan, Dristor) with a stock of 270,000 sqm, so that the two areas are concentrated 47 percent of modern retail spaces in Bucharest.

While in Sector 3 Parklake Plaza was completed last year, Sector 6 saw the extension of the Militari Shopping project. Overall, last year in the Capital there were completed retail spaces with a leasable surface of approximately 100,000 square meters.

The increase in consumption recorded last year, of around 14 percent, is reflected in the degree of occupation of around 96 percent. The main commercial centers have an occupancy of up to 100 percent, while larger retail spaces can be found in Sectors 3,4 and 5.

„In the past 18, at the opening of Bucharest Mall, the retail market in the Capital transformed drastically, constantly adapting to the new requirements of retailers and consumers, and this tendency will continue in the upcoming years. This evolution will also involve the creation of new major projects, with varied options,” Cristi Moga, DTZ Echinox Research Consultant said. Currently, in Bucharest there are 15 shopping malls, 11 retail parks and six commercial galleries that host approximately 2,700 stores and have over 50,000 parking lots. The average density of modern commercial spaces reached a level of 650 sqm/1,000 inhabitants, the highest level being reached in Sector 1 (967 sqm/1,000 inhabitants), which hosts the Baneasa project. The area that has the least retail spaces in the Capital is Sector 5.