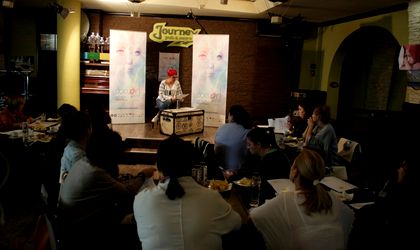 Docuart Fest presents the complete program for the 6 days of projections and events in the period September 27 – October 2, at Cinemateca Eforie and the Peasant Museum Cinema – Horia Bernea Hall.

The fifth edition of Docuart Fest includes over 40 movies, debates, all having an element of novelty for this autumn. The selection of exclusively Romanian movie documentaries remarks itself especially through diversity. The 25 movies in the competition are signed by professional editors, television producers and students, being reunited productions that bring diverse approaches of the authors and, at the same time, different experiences. Moreover, 20 of those movies are premieres.

In addition, this year, there is a section outside the competition called “Variațiuni / filme despre oameni și locuri” (Diversions / movies about people and places), the space where there are grouped real images of the existence, captures as they are by the camera.

Docuart also organizes, in partnership with \ARCEN “Bucureștii ce se duc | Povești din cartierul evreiesc” The Bucharest that is dying/ Stories from the Jewish neighbourhood, a guided tour of the Capital’s places and people, on September 24-25.

The movie list contains co-productions with countries such as China, The Czech Republic, UK, Republic of Moldova or Serbia. They capture life stories of our days or passed events whose time nobody can turn their back on. Portraits, stories, cultures, researches – the documentaries are awaiting for the film lovers to enter the Eforie cinema and the Horia Bernea Haul of the Peasant Museum, in order to know them all. Every movie will have a double projection in each of the cinemas and will be followed by session of questions and answers with the directors.

At the Eforie cinema, the festival starts on September 27, at 19:00, with the opening gala during which it will be screened the movie “100 de movile” (100 Risings) (R. Max T. Ciorba), entered in competition in the major section.  At the end of the screening, the director alongside the ones present in the movie, Alexandru Arcus and Marius Andrei Alexe (MC Bean, Subcarpati),will be present and ready to talk to the public.

Prior the screenings there will be masterclasses held by Cristian Tudor Popescu and Dan Curean. They will be talking about manipulation in the contemporary documentary, on October 1, 11:00 o’clock and, perspectives of interpreting the reality in the documentary movie, on September 29, at the same hour, at Cinema Eforie.

In between those two masterclasses there will be a debate about the Colectiv fire. Docuart Fest brings in the center of the debate “How is the reality seen on the TV”, the representatives of the five TV stations (Digi 24, ProTV, TVR, Antena 3 and Discovery) that created documentaries about the incident.

In the festival program there is also a live performance with the role of exploring the depression. Cinty Ionescu and Sorin Paun are (re) interpreting and (re) mixing love personal stories about depression, starting from the interactive documentary “Fata ascunsa” (The Hidden Face).

The full program can be seen here.

Bucharest Docuart Fest is organized by Docuart, being co-financed by the Ministry of Culture through the program Accces and the National Center of Cinematography.

The entrance is free during the screenings and the discussions of Bucharest Docuart Fest.