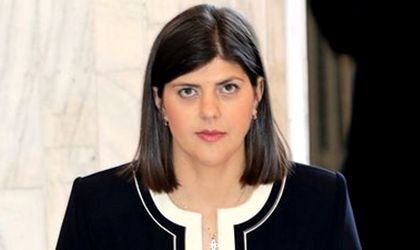 The head of the National Anticorruption Directorate (DNA) Laura Codruta Kovesi has been hit by renewed plagiarism accusations by MP Sebastian Ghita. Ghita turned himself in on Tuesday at the General Prosecutor’s Office and revealed his alleged participation in drafting a document clearing Kovesi of plagiarism, back in 2012. Kovesi denies the plagiarism accusations.

On Tuesday evening, MP Sebastian Ghita went to the General Prosecutor’s Office and turned himself in for his role in the alleged coverup of Kovesi’s plagiarism, which, he claims, involved several high-placed individuals. “I decided to come to the General Prosecutor’s Office (…) and to do an act of self-denouncing in connection to the way in which I, Sebastian Ghita, and several high dignitaries of the Romanian state participated in the forging (…) of the technical report on the doctorate thesis of Laura Codruta Kovesi,” Ghita told Agerpres on Tuesday evening.

Ghita’s allegations refer to a technical report drafted by a committee assembled in 2012 with the purpose of checking the plagiarism accusations that first hit Kovesi the same year. In his self-denounce, Ghita argues that, in fact, the committee never met and that the decision to clear the DNA head of plagiarism accusations was a political one. “In practice, that committee did nothing and that report comes and says that the PhD of Laura Codruta Kovesi is not plagiarized and I can tell you that the committee never gathered, and the report was written at the Romanian Government,” Ghita stated on Tuesday. According to Ghita, the decision was aimed at protecting Kovesi. “Because we all believed that she is doing Romania good (…) we took the decision to change it.”

When questioned about the identity of the other individuals involved in the alleged coverup, Ghita told the press: “Several high dignitaries, and myself. In order to protect those individuals, I am convinced will become witnesses, allow me not to name them right now. Tomorrow they could be arrested or harassed.

The DNA head responded to the renewed plagiarism accusations in a press release, posted on the institution’s website. “In reference to the doctoral thesis “Combating organized crime through criminal law provisions,” I want to state that this is a material that I fully own and did not plagiarize,” the statement reads. Moreover, Kovesi argues, she rejected the accusations back in 2012, when the plagiarism accusations first surfaced in the public space. “The defamatory accusations of the individuals currently investigated by the DNA, with an unprecedented virulence this year, were the subject of complaints submitted to the Superior Council of Magistracy, which found that they damage the image and the credibility of magistrates,” the release added.

Viorel Pasca, scientific coordinator of Kovesi’s Phd thesis, said he did not know about the existence of the 2012 committee. “The PhD thesis of Ms. Kovesi started 2008. Her doctorate was supposed to last 4 years, she did it in 3,” he told Hotnews.

Ghita is currently investigated by the DNA in several cases, under influence peddling, fiscal evasion, money laundering, complicity to changing the use of EU funds and corrupting voters during the 2012 parliamentary elections and the 2014 presidential elections allegations.

When questioned by the press on the matter, President Iohannis’ commented briefly, deeming Ghita’s gesture as a “strange” one, and something very likely motivated by the upcoming elections campaign. “Those in charge of these matters should do their job,” the president added.

Speaking on Wednesday, Dragnea called for investigations. “It is a serious accusation (…) and the institutions in charge must investigate, to get to the truth. If what Sebastian Ghita says is true, is a very serious thing,” Dragnea told broadcaster Antena 3. The PSD head added that he does not know yet whether he should believe Ghita’s allegations. “There are two options here: the first one that he is crazy (…) The second one is the option that everything he says is true, and if he wants to go all the way, we should look closely. As there are two options, I refrain from stating an opinion,”the PSD head said.

Speaking to a Bucharest-based broadcaster, former president Traian Basescu said he knew that the Phd thesis of the DNA head is plagiarized since 2014 and named Mihnea Costoiu and Victor Ponta among those involved . “Among those involved in falsifying the report on the thesis of Kovesi are Mr. Ghita, Mihnea Costoiu, with the knowledge of the prime-minister at the time, Mr. Ponta. (…) It is obvious that the report on the plagiarism of Kovesi was forged”, Traian Basescu said.