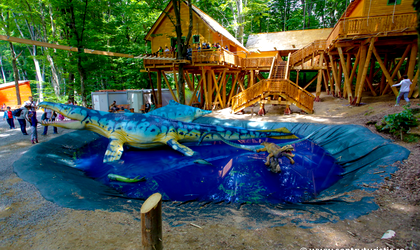 Statistics show that since its opening in 2015, the number of visitors has reached 350,000 people. Moreover, it is estimated that the number of tourists visiting the Rasnov area has increased by 50 percent compared to last year’s data.

Throughout last year, Dino Park has organized three unique scientific exhibitions of rare fossils. Visitors had the chance to see the skeleton of the “Balaurul Bondoc” dinosaur (the only one of its kind in the world), the almost-intact skeleton of a mastodon, the only almost entirely completed skeleton in the world (85 percent completed) and the exhibition of rocks and fossils discovered in the Carpathian mountain area.

The park consists of 46 real-size dinosaurs, placed on an impressive route. It also has a children’s playground, as well as a 9D movie theatre and other interactive areas.

“Because people’s interest in the park is so big, we are trying to always bring new, interesting and educational items. This is who we reinvest a good part of the sales to develop the park, not only at an interactive level, but also at a scientific one,” said Adrian Apostol, manager of Dino Park.

“We are delighted that so many people came to visit the park in one year and that a part of them decided to stay in Rasnov,” he added.

The dinosaur park is located on Strada Cetatii, near Rasnov Citadel and it is open everyday starting from 10:00 until 18:00 (the park closes at 20:00 on Saturday and at 19:00 on Sunday). Prices for a ticket vary from RON 22 (for children) to RON 26 (for adults). Children under the age of three have free access.