Digital mode on: The future of industry in Romania – sharing your work with robots 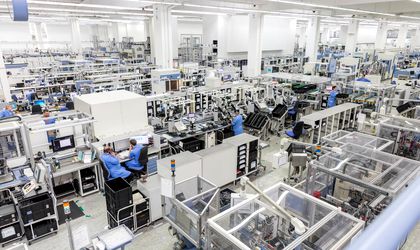 The digitalization of manufacturing operations is taking off around the world, bringing shorter production cycles that are personalized to an impressive level depending on the customer’s demands. In Romania, digitalization discussions are still limited to business roundtables, but executives are becoming aware that the groundbreaking wave of Industry 4.0 is coming and that employees will start asking some difficult questions when more robots pop up around them in the production halls.

Specialists say the future brings both challenges and benefits for the local industrial sector. On one hand, operational efficiency will improve and production costs could fall, but on the other hand companies will need to train their employees better to work with robots. Some jobs will be eliminated in the process, but new positions will be created by firms hungry for employees with digital skills.

“In our view, digitalization represents a driver for innovation and prosperity, but it also poses a risk to investment in technologies that might become obsolete significantly faster than in the past. It is no longer about being an early adopter, but investing smart and adjusting your strategy at the speed of light,” Razvan Popescu, senior manager in the department for business assistance | RPA at EY Romania, the professional services firm, told BR.

He added, “Romania remains a pool of IT resources with a relevant contribution to global technology development, but it still fails to encourage local industrialists to invest in digitalization. Moreover, the advantage of having cheap and highly qualified blue-collar workers might become a risk for our country, since most of these jobs are expected to be automated in the next 5-10 years.”

Close to 1.9 million people were involved in the industrial sector in 2015, according to the most recent data published by the National Institute of Statistics (INS). This includes employees and individuals that have started their own businesses in the sector. With the industrial sector – which accounts for 23.1 percent of the country’s GDP, making it one of the largest contributors to economic growth – news of layoffs due to massive investments in automation might generate a backlash from policymakers.

However, the future of jobs and the way in which technology will shape employees going forward doesn’t yet seem to be on the agenda of politicians. Romania’s elected officials may not be that aware of the implications of Industry 4.0, but companies are having an even harder time grasping the new realities.

“The majority of industries in Romania are behind their European peers in terms of investments in technology and digitalization maturity, except maybe the automotive and telecommunications sectors,” said Popescu.

Regardless of the sector, only 16 percent of local companies are keeping up with digitalization whilst turning results from this process, according to The Barometer of Digitalization in Romania 2017, a study by Valoria, a consultancy firm.

Constantin Magdalina, emerging trends and technologies expert, who co-authored the report, tells BR that the risks of digitalization “lies mainly with inadequate decisions regarding the technology to be implemented, faulty implementation programs, resistance to change, leaders who do not understand the need for digital transformation, and many other factors.”

In manufacturing, digitalization lowers the cost of production while simultaneously ushering in new kinds of workers, managers and company leaders. Most of the efficiency is being driven by the Internet of Things (IoT).

One of the companies that has started the digitalization process for its factories in Romania is Siemens. The German engineering group uses the automation of production for digital tracking of produced goods (e.g. electrical components) and their assessment in every step of the process along the production lines.

“The knowledge gained within this process is digitally documented so that improvements can be made, and errors can be corrected – should any product return with a defect,” George Costache, CEO of Siemens Romania, told BR. Within one of our factories, we also have Romanian teams doing research and development for works related to TIA Portal – Siemens’ global solution, offering the complete range of digitalized automation services, from digital planning and integrated engineering to simulation tools, diagnostics and energy management functions.”

Siemens’ Amberg Electronics Plant in the German region of Bavaria is already combining real and virtual worlds, allowing products to control the production themselves.

One result is that in the same amount of production space (10,000 sqm) and with a workforce that has changed only slightly at around 1,200 people, the plant has increased its production volume eightfold in the past 20 years. Therefore, humans and machines together are eight times more productive today than 20 years ago, according to the company.

Digitalization will also allow industry players to build prototypes of new products in the virtual environment in a process known as the Digital Twin. This means that the actual production will start only after the product is already performing.

“This pairing of the virtual and physical worlds allows the analysis of data and monitoring of systems to head off problems before they occur, prevent downtime, develop new opportunities and plan for the future by using simulations,” said Costache.

The business potential for digitalization is impressive, judging by the forecasts. Accenture Research and the World Economic Forum found that industrial manufacturers could contribute to unlocking an estimated USD 100 trillion in value over the next seven years – if they manage to leverage the Industrial Internet of Things (IIoT) and digital to vastly improve health and safety, employment, income, industrial value creation, resource efficiency and profits within their operations and ecosystems

The overall business environment in Romania has become more aware of the strategic importance of security for digital operations since WannaCry ransomware spread across the world, hitting the production plants of multinational groups and public organizations. Dacia, owned by France’s Renault, halted its production for around a day and confirmed that it had been targeted by cyber criminals. The carmaker was the highest profile victim of the attack in the country.

“Recent months have proved to us that we are more vulnerable than we thought and that cybersecurity risks are not just fairy tales, but realities. Multiple companies have faced significant losses in intellectual property, brand image and capacity to deliver products/services to their clients, thus putting their existence in danger. Even if it appears to be a cost which is not easily translated into benefits, companies should put more emphasis on IT security threat mitigation,” argues Popescu of EY Romania.

Investments in IT security are being made by Romanian companies mainly due to regulatory requirements, according to a study published by PwC Romania and Microsoft Romania. Some 40 percent of the responding companies lacked a formal IT security strategy, while 60 percent said they were looking to increase their IT security budget in the next financial year.

With Industry 4.0 set to usher in a complex digital ecosystem and more robots in the industrial sector, the skills required by people wishing to work in a manufacturing facility, for instance, will also go through an update.

The main fear, which some experts say is a certainty, is the displacement of highly experienced blue-collar workers.

Popescu of EY Romania says that the education system must adjust so that all students can build strong digital competencies, no matter their specialization.

“Vocational schools should not bypass these curricula changes, since most of the future blue-collar jobs are expected to require a mix of digital and handicraft skills. Personal development and further specialization improvements should continue throughout the entire career path and this should not be an option but a habit,” he argued.

Meanwhile, the CEO of Siemens Romania says that the “horror scenarios” in which robots take over our jobs are challenged by scientific research.

“In a nutshell, people need to understand their essential role in the Industry 4.0 world – as the creative leaders and thinkers who will use their intelligence to conceive of all necessary processes and procedures, and who will write software to convey the necessary information to the machines,” said Costache.

Turning to the future, the head of Siemens Romania suggested that we will start to see more cases in which robots working with humans will be able to react with flexibility with the help of Artificial Intelligence.

“Studies suggest that a robot will, for example, be capable of figuring out when its human partner is tired and afterwards adapting its tempo accordingly, in order not to overload its human co-worker,” said Costache.

Workers of the future are set to become more connected to the running processes of a factory, predicted representatives of Accenture Romania.

“Reality as we know it will be doubled by virtual and augmented reality. Workers will need to work in tandem with robots, HMIs, smart applications, and artificial intelligence,” say Accenture’s consultants.

Already, the supply of industrial robots is growing ever faster. Statistics from the International Federation of Robotics (IFR) show that the projected number of robots used in the industrial sector is set to climb from 290,000 in 2016 to 414,000 in 2019.

In the European Union, Germany is the leading state when it comes to the usage of robots in the industrial sector, with 1,147 per 10,000 employees as of 2015, according to the IFR.

Companies will play a central role in helping their employees make the transition to Industry 4.0 and Siemens says that it already provides online courses, as well as in-person training and certification.

For example, apprentices in the Siemens Campus in Erlangen, Germany, learn to use augmented reality (AR) in order to work alongside cooperative robots. They learn to check components digitally, and to test code for automation systems by using virtual models.