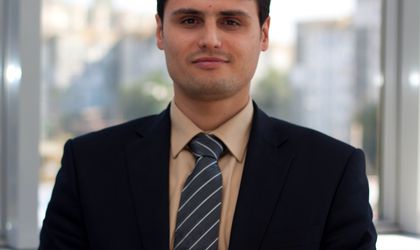 Deloitte Romania announced it was adding a new audit manager to its team: Ion Efros (pictured). The audit manager is an experienced consultant, who has been working with Deloitte since the start of his career, in 2007. Previously, he worked with the Deloite team in Chisinau and Bucharest. He advised clients in areas such as manufacturing, real estate, telecommunications, energy and retail.

He is a member of the Association of Chartered Certified Accountants (ACCA) and a student of the Chartered Institute of Management Accountants (CIMA). He is a graduate of the Academy of Economic Studies in Bucharest and holds a masters degree in business administration. He speaks English and Russian.

Before joining Deloitte, Raluca Demian worked in the financial department of a multinational. She is a student of the ACCA and a CECCAR intern. She holds a masters degree in Auditing from the Faculty of Economy and Business Administration of the West University in Timisoara and is a graduate of the Accounting Faculty of the same university. She speaks English and French.

Iasmina Ranila graduated in 2011 from the faculty of Economy and Business Administration of the West University in Timisoara, with a specialization in accounting. She also holds a masters degree in accounting expertise. She speaks English, Spanish and German.