Declaration of war between Fordaq and EIA over Romanian forestry 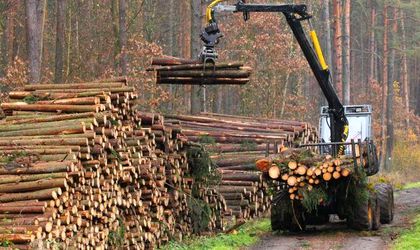 The Forestry and Rural Development Council of Romania (Fordaq) and the Council of Forests and Rural Development responded  the report by the US Environmental Investigation Agency (EIA), according to which Holzindustrie Schweighofer wood processing company continues to source wood from parks national, does not have any legal basis is not based on any specialized study.

According to the EIA report, Holzindustrie Schweighofer continues to receive timber from Romanian national parks and over the past 18 months the wood suppliers of the company have transported more than 35,000 cubic meters of wood from two national parks. The Council of Forests and Rural Development and Fordaq believe that some organizations are launching in the public space information that does not correspond to reality.

“The main message of the EIA report aims to denigrate the Romanian wood industry and persuade foreign beneficiaries not to buy Romanian wood under the pretext that it comes from “national parks”, and its exploitation leads to the disappearance of “virgin forests” “, said Fordaq.

According to the two organizations, the EIA’s request to stop forestry works in the areas of sustainable conservation of national parks has no legal basis and is not based on any specialty study, since all national and natural parks have an internal zoning , strict and full protection areas where human intervention is prohibited and sustainable conservation areas, “buffer”, where the legislation provides very clear forestry.

“It’s like asking a grain silo that buys wheat from dozens of small farmers to keep a record of the origin of every grain of wheat. Like the wood warehouse, the grain warehouse has traceability and documents for each transport, but after reception, obviously the wheat is mixed in the warehouse, “the release stated.

Thus, they draw attention to the fact that EIA recommendations do not have any legal basis, go beyond national and European legislation and are a utopia even from a technical point of view, especially as it addresses the plate industry – producers Kronospan, Egger – companies that use in the process technologically small logs, debris from primary wood processing and wood mainly imported.

“In fact, the purpose of EIA is to lead Romania into a high area of ​​illegal cuts, so that the requirements of control of legal origin become so complicated that the Romanian wood industry becomes uncompetitive, and the external beneficiaries to bypass the products from wood in Romania, due to the presumed risk of wood coming from illegal cuts, “the communique concluded.