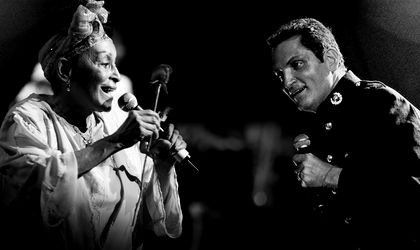 The end of April will bring to the Bucharest scene a colourful event, suitable for those who love Cuban sounds. Damian Draghici, the famous Romanian singer, will be on stage with one of the legends of the worldwide music, Omara Portuondo, launching his Gypsy Cuban Project. Together with Omara Portuondo, Damian Draghici will sing Serenata en Batanga, the most recent song of the artist, which will be interpreted at pan-pipe.

The Gypsy Cuban Project means an album of world music, an itinerant journey to Cuba in order to find out the common roots between Roma and Afro-Cuban music. Songs like Saraiman, Ileana, Ileana or Chan Chan will have gypsy-Cuban sounds, something totally new for the public.

Jazz-loving bolero singer Omara Portuondo, the 85-year-old Cuban musical firebrand who over the years was the centerpiece of the evolving band, is back on the road. This concert is an incredible journey to a life-long music career, from her youth’s magic years to her love for cabaret music, following also the period with Buena Vista Social Club. Last, but not least, the public will benefit from the most amazing Havana sounds.