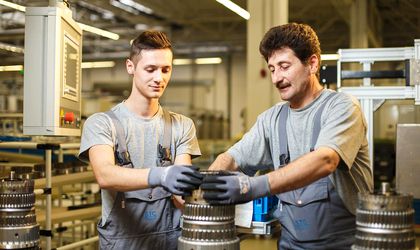 Star Assembly, Daimler’s Romanian subsidiary, has started production of the 9G-Tronic nine-speed automatic transmission with the official launch at their Sebes factory. The expansion of their transmissions production capacity represents a total investment of over EUR 300 million and around 500 new jobs created in Sebes, according to the company.

Through this expansion, “we now have the possibility to cover more flexibility and more efficiently the demand for automatic transmissions,” said Markus Schäfer, member of the divisional board of Mercedes-Benz Cars, Manufacturing and Supply Chain Management.

The new production facility is approximately the size of ten soccer fields and its construction used some 500 kilometers of cables and 5,000 tonnes of metal. “Today’s production launch and the investments associated with this endeavor in Sebes offer the region special perspective for the future. In this way, we continue the successful collaboration between Daimler and Romania, as location for production,” said Costin Borc, vice-Prime Minister, Minister of the Economy.

Daimler currently employs over 1,800 people at the two sites operated by its Romanian subsidiaries Star Transmission and Star Assembly. “Our two Romanian subsidiaries are an important part of our global powertrain production compound,” explained Frank Deiß, head of production powertrain Mercedes-Benz Cars and site manager Mercedes-Benz plant Untertürkheim. “The start of production of the high-volume 9G-Tronic transmission in Romania increases the competitiveness of our international production network,” he further added.

Mercedes-Benz manufactures automatic transmissions in a flexibly integrated production network in which Untertürkheim is the lead plant, with transmission being assembled in Romania. The employees at the Romanian subsidiary were trained intensively in all assembly processes for several months as part of a qualification program at the transmission-production facility in Untertürkheim. “The investment and the continuation of the expansion process in Romania shows the appreciation to the commitment and know-how of our personnel,” stated Falk Pruscha, managing director of Star Transmission and Star Assembly.