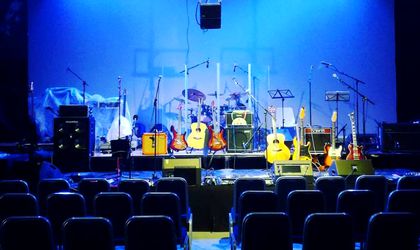 The Romanian cultural scene, both public and independent, is slowly starting to demonstrate that larger audiences can transform a cultural product into a business – or at least try to. Business Review shares the lowdown on the nationwide cultural projects that opened in 2017, in an attempt to give the country’s culture vultures new places to nest. In November 2017, the Librarium Group opened up a new library in the interior of the Bucharest National Theater, focusing mostly on books related to the theater world. The impressive space will host a series of bookworm meetings with writers and actors.

ArtHub is an independent artist-run community located in the center of Bucharest. The 600-sqm space hosts 11 individual studios, two collective work spaces and 23 resident members. An Indigogo call has been launched to help them complete the location.

The palace, located in the historic center of Blaj, was designed in 1930 by the architect Victor Smigelschi to host cultural events and was the only building designated for cultural use in the city. In the 1960s,

it underwent changes to accommodate the city’s cinema and it later also became home to the History and Ethnography Museum, the city’s  library and the Blaj Wire Broadcasting Centre. The building was seriously damaged in a fire in 1995, and lay in ruins until 2012 when the municipality of Blaj took the initiative to restore it, with help from architect Vlad Rusu. The project was the winner of the Europa Nostra EU Prize for Cultural Heritage. This is definitely the place to be for fans of live music and outside-the-box gigs. Since the recent opening, the organizers have managed to persuade several top bands to come to Romania, some for the first time. To name a few: Pro Musica, Motorpsyho, The Myrrors, and Marco Mendosa.

Launched in the fall of 2017, the Misc. Arts Center has set out to be a space for new and innovative photography, theater and miscellaneous arts. Misc. is located within one of Timisoara’s most important historic architecture monuments, its cigarette factory. The first one built in the Austro-Hungarian empire, and the first in Romania way back in 1847, it had since become a lifeless hulk. Organizers had sought to breathe some life back into the area. The History Museum of Transylvania, Cluj-Napoca

Recently reopened after years of renovations, the impressive museum has its headquarters in an architectural monument of the 19th century – the neoclassical Petrichevich-Horvath Daniel House (Petrichevich was a patron of the arts and literature). The museum has been open to the public since 1937, presenting one of the country’s largest and most well organized overviews of antique history, a valuable collection of paintings, a ceramics collection from medieval and modern times, a medieval terse and an ethnographic collection. Highlights include: the Egyptian Collection, featuring an authentic mummy from the third century BC in its painted wooden sarcophagus; the stove tiles collection, which contains approximately 700 pieces from the 14th-19th centuries, and also two stoves; and oriental weaponry, such as battleaxes and pistol swords, crossbows and even a cannon-ball tube.

This coffee business offers visitors the chance to paint their own mug while enjoying a cup. The space looks like a bijou contemporary gallery, with pottery designed by the clients. Plates, bowls, mugs, vases, teapots, flasks, figurines and design objects have been fashioned by creative hands. The company also organizes team-building sessions.