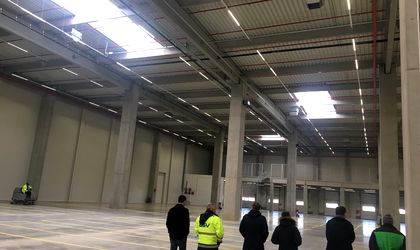 CTP, the one of the most important premium industrial parks developer and long-term manager in Romania and Central and Eastern Europe, and DSV, the fifth biggest global transport and logistics companies, signed a leasing agreement for approximately 40,000 sqm  in CTPark Bucharest West. CTP invested about EUR 12 million in the development of the new logistics spaces occupied by the Danish company in the first days of February.

The Danish group DSV has signed the leasing agreement for the logistics spaces in CTPark Bucharest West in the summer of 2017. The contract has a ten years length and the building will be used for storage activities. The warehouse is Built-To-Suit and was built according to CTP’s above the market standards in what concerns the development of industrial and logistics spaces.

“We are very happy with DSV’s decision to trust us. They are our tenants since 2015, when we bought CTPark Bucharest. Last year they decided to expand their storage spaces in CTPark Bucharest West, our property located at km 23. This is a sign that we did our job well until now. CTP aims at becoming more than an owner for the companies that are clients in our parks: we want to put together with our tenants the foundation for long-lasting partnerships. We grow simultaneously with our customers and we adapt to their needs. I think this is the secret of a fruitful partnership!”, said Remon Vos, CEO of CTP and country-head of CTP Romania.

“We started our collaboration with CTP almost three years ago and we have been extremely pleased with the conditions that have been created in CTPark Bucharest. Our business is growing, we have customers that are developing rapidly, sometimes even faster than we anticipated, new projects and contracts that we have to honour under the best conditions. So our need for more storage spaces came as a natural step. I am convinced that CTPark Bucharest West will soon become one of the most important logistics hubs in Central and Eastern Europe. We do not exclude renting other spaces here or in other CTP parks in the country, depending on the growth rate of our customers”, said Sergiu Iordache, general manager of DSV Romania

DSV is CTP’s tenant since 2015, when the developer took over the logistics park situated at km 13 on the A1 motorway, later renamed CTPark Bucharest. DSV occupies 55,000 sqm here, used for storage activities. The new logistics spaces that DSV occupies in CTPark Bucharest West were built by CTP . The new warehouse is the first fully built facility developed by CTP for the Danish
transport and logistics company.