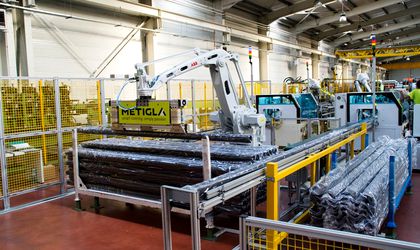 The Belgian producer of metal roofing Coilprofil changed its name to Metigla and has completed the first phase of an investment program worth over EUR 6 million.

Until now, part of this amount has been directed both towards the acquisition of industrial robots, which will simplify and streamline production and delivery processes, as well as launching new products in the Residential Division.

During the period 2019-2020, the second part of the development plan will be carried out, when major investments are planned for the expansion of the production and storage areas, as well as for the development of the team.

”This year’s rebranding, in which we took the name of our most famous brand, will be accompanied by the company’s largest investment program in the last 18 years. The ultimate goal is to increase the competitiveness of Metigla products and to expand the company nationwide and internationally. We started with technology investments, being among the few players on this market that are already working with industrial robots. This will allow us to reduce working times, streamline the process by automating production and improving delivery times. Another innovation, which we are going to implement by the end of the year, is a new integrated IT system that will manage all the company’s processes and support the development for the next 5-6 years, ”said Liviu Mistodinis, CEO of Metigla.

The company thus aligns itself with the increased plant automation trend, which tends on the one hand to increase efficiency and reduce production costs and, on the other hand, to compensate for staff shortages. It is estimated that over the next two years, more than 1.7 million new industrial robots will be installed in factories around the world by 2020 total global robots running at over 3 million.

As far as the portfolio is concerned, Metigla has launched two new products this year in the Residential Division. Mira, the latest Metigla metal tile profile, is a special model for houses inspired by Mediterranean architecture, Mira and Teck.