Co-working spaces operators leased 20,000 sqm office space in the first half of the year in Bucharest 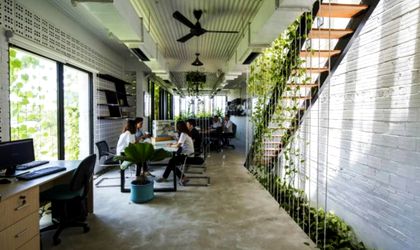 In the first half of this year, the operators of co-working spaces rented office space of almost 20,000 sqm in existing or developing buildings in Bucharest, with a 13,4 percent share in the total volume of transactions, estimated at about 150,000 sqm, according to Cushman & Wakefield Echinox data.

The most active occupants were, in the first half of this year, the companies in the Technology and Telecommunications sector, accounting for almost 31% of the total transactions, with the following companies being active in the energy sector – Petroleum and Gas, with a market share of 13.5 percent.

On the third position were the operators of co-working spaces, in which three new companies – Mindspace, Spaces and Rent-a-desk – decided in the first half of the year to expand their activity in Bucharest.

“The trend in the Western markets, where co-operative operators have started to take on a larger share of transactional activity, has really started to is also manifested in the office market in Bucharest. Last year, 21 percent of leased premises in the London office market were taken over by co-operating operators. In the first half of this year, 13.4 percent of the rented offices in Bucharest are destined for co-working spaces. The stakes of these companies are both freelance professionals and start-ups, as well as companies that can and want to give employees the opportunity to work from another office closest to home to reduce their time spent in traffic . Given that traffic in Bucharest continues to be a major discomfort and pressure to attract and maintain labor, companies find solutions to keep their employees efficient and happy, ” Madonna Cojocaru, partner, Office Agency, Cushman & Wakefield Echinox, states.

Approximately 40 percent of the volume of transactions was concentrated in the West, with significant renting activity being recorded in the Center (19.6 percent) and North Center (14.4 percent). The vacancy rate remained below 8%, with the lowest available office areas being North Central – 3 percent, CBD (Central Business District) – 4.3 percent and West – 4.5 percent.

In terms of deliveries, a single office building, the second Globalworth Campus building, was completed in the first half of the year, eight other projects with a leased area of ​​more than 150,000 square meters were to be put into use by the end of the year. According to Cushman & Wakefield Echinox data, 70 percent of the building spaces to be delivered in the second half of the year are already leased.