Cluj-Napoca City Hall to develop a new residential neighbourhood that can accommodate 120,000 people 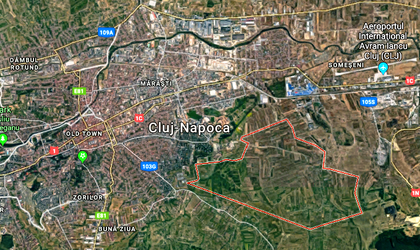 The Cluj-Napoca City Hall is preparing to develop a new neighborhood in the city, in the Colonia Sopor area. Local authorities have decided on a 24-hectare area to become a giant residential zone with more than 120,000 inhabitants.

Around 1,600 homes were built in the city during the first half of the year – the second highest building rate in the country after the Bucharest-Ilfov area.

At the time of completion, the new area will become the city’s largest neighborhood.

For the construction of the new neighborhood in Colonia Sopor, near the eastern boundary of the city, two studies are currently being carried out: one topographic and one geotechnical. Architects will have to determine, given the land configuration, exactly where the streets, parks and dwellings can be built, as well as how tall the buildings can be. For this, the local authorities will organize an international competition where architects from all over Europe will be able to sign up to build in Sopor Colony.

The City Hall has ordered an integrated PUZ (zonal urbanistic plan), and the private developers will work on an area with predetermined settings. The neighborhood will offer several other facilities besides housing, including schools, kindergartens, social services, shopping areas, entertainment, wide streets, and it will also contribute to the decongestion of city traffic.