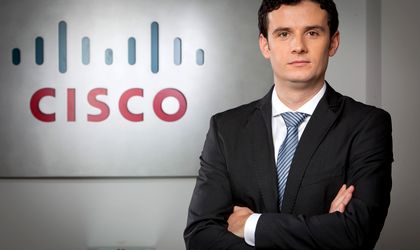 Following the global launch on 20 June, Cisco introduced today in Bucharest its new solutions for enterprise networks. The new, intuitive networking system is capable to anticipate actions and thwart security threats, while continuing to learn. The move is part of a major hardware and software rollout that marks, according to the IT giant, “a quantum leap in the evolution of Cisco’s Digital Network Architecture (DNA).”

The new type of network is meant to address the challenges facing traditional networks. For instance, networks are required to process an increasing amount of data of outstanding complexity. That is why, the new network solution is designed to handle growing amounts of complex data while it constantly learns, adapts automates and mitigates security threats.

“We are transforming the network with something that has human qualities,” Dorin Pena, Cisco general manager said. Accordingly, the network will be “powered by intent” and informed by the context, creating a type of intuition that will be able to anticipate use. Hence, “the network will know the user,” Pena explained. Unlike traditional networks, which identify users according to their IP, the new type of network will recognize users based on behavior patterns. Authentication will still be mandatory, based on username and password, however users will be profiled by means of monitoring of the type of traffic and other markers in order to identify users that are not authorized.

The new type of network developed by Cisco will also be able to take data from the network and make big data analysis. However, a major innovation is represented by the network’s ability to identify security threats based on behavior patterns, the Cisco representative said.

“Eighty percent of enterprises are victims of attacks, and 41 percent of that traffic is encrypted,” Pena said. Cisco allows IT departments to detect threats in encrypted traffic with an accuracy of up to 99 percent, with less than 0.01 percent false positives. Thus, according to Cisco, the new network provides security while securing data privacy.

“We regard with optimism the potential Romania has and hope to tap into that potential,” Pena said. In reference to concrete projects, the Cisco Romania representative mentioned smart cities as a sector that has great potential and expressed hope that projects will move forward and manage to pass the pilot stage.

According to Pena, the new software and hardware solutions are mainly targeting and are likely to be adopted by large companies first. “We target large companies, such as financial companies, telecom operators and companies that have a lot of branches – including manufacturing,” Pena said. “They can also be adapted to medium and small clients, although we notice that the companies that first adopt it are the large companies.”