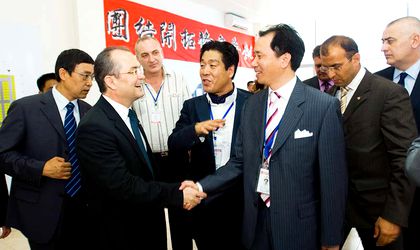 China Town Romania, a company owned by 19 Chinese businessmen, has officially opened a EUR 27 million wholesale commercial center in Afumati, 16 km from Bucharest, informs Mediafax newswire. The center which covers 138,500 sqm and includes1,240 stores represents the first phase of a EUR 150 million project which will feature a shopping mall, entertainment facilities, warehouses and residential areas, according to company representatives.

95 percent of the stores are sold and the rest can be leased said Alexandru Ioan, executive director of China Town Romania and president of the Romania-China Bilateral Chamber of Commerce.

“The leasing contract covers three years. In the first year, tenants don’t pay anything, in the second year the rent is EUR 10 euro per square meter and in third the rent reaches EUR12 per square meter,” said Ioan quoted by Mediafax.

Present at the opening event, prime minister Emil Boc said the China Town commercial center will represent a tourist attraction both for Romanians and foreigners.

“This is the best time to invest in Romania,” said Boc. He suggested Chinese businessmen that they should consider investing in areas such as energy, transports and the environment through public-private partnerships saying that due to its economic stability, Romania is better positioned than other economies in the euro area.