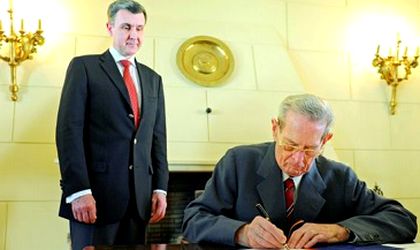 The birthday of Majesty King Michael I  will be celebrated together with the violinist Roman Kim and the conductor Tiberiu Soare in the Royal Charity Concert at the Romanian Atheneum on October 25, with the support of Princess Margareta of Romania Foundation .

The concert aims to raise funds for the Young Talents programme 2017. The new generation of artists across the country, with ages between 14 and 24, can apply for a scholarship in December this year. A jury of experts will select the most promising classical music students.

The guest Kim is, at  24 years old, a known violinist. Soare is the conductor of the orchestra and recipients of Young Talents scholarship, conducting since 1999, since when he has been working with numerous philharmonic orchestras and opera houses and participated in competitions in Sweden, Israel, China, Germany, Switzerland in addition to his activity work at Sala Radio.