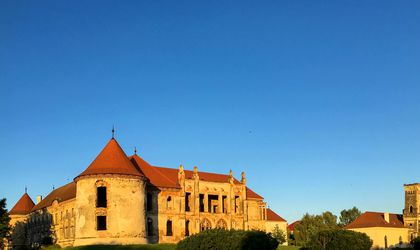 Formerly known as the Transylvanian Versailles, Banffy Castle in Bontida is considered one of the most beautiful historical buildings in the Carpathian basin. For four years now, electronic beats have put the castle on the international music festival calendar – both for fun and to help save its heritage. The full restoration of the building will cost around EUR 7-10 million, money that the Transylvania Trust Foundation is trying to raise from festivals, international funding, projects and the authorities. They hope that within ten years, Banffy Castle will have had a complete facelift. How are they doing so far?

Twenty-four acres and six buildings, including the castle itself, stables, chapel, and flour mill. In its hundreds of years of history, it has gone from former aristocratic residence to military hospital, drivers’ school, children’s hospital and historical monument under the auspices of the Royal House.

The complex had reached an extremely precarious condition by the end of the 90s. The owner of the castle is the daughter of Count Miklos Banffy, Countess Katalin Banffy, who lives in Morocco. The Countess and the Transylvania Trust signed a concession agreement for 49 years, under which the trust will be responsible for the maintenance and upkeep of the castle and will develop it as a built heritage conservation training center and cultural center.
In 1999, the site was included on the 100 Most Endangered Monuments List published by the World Monuments Watch. Conservation works started thanks to the agreement signed in 1999 by the Ministry of Culture of Romania and the Ministry of National Cultural Heritage of Hungary. The Transylvania Trust launched the built heritage conservation training program for the castle in 2001, since when students have carried out conservation works on the buildings. In 2003, the structural consolidation of the Miklós building was completed along with the roof, with the support of the World Monuments Fund.

The overall aim of the project is the complete restoration of the site, carried out using traditional methods and materials, through international collaboration and an exemplary cooperation between designers and executors. Through this, they would like to set an example of sustainable development of the built heritage, and of professional conservation, which incorporates new concepts in combining the teaching process with physical restoration through practical workshops, and with the drive of public expectation and approval.

In four years of the festival, Electric Castle has brought over 200,000 people to the Banffy Castle. Some of the money from tickets and subscriptions goes to the Transylvania Trust. This year, the event will be held from July 14-17, and a four-day pass costs RON 399.

In a bid to help “electrify” festival fans, the organizers have launched the Unofficial Partners campaign to convince managers to make the Monday after a day off for employees who attend the event. Electric Castle offers a dedicated platform, www.unofficialpartners.com, where companies can be promoted, regardless of size or the number of employees going to the festival. Andi Vanca, head of communications at Electric Castle, said, “We have counted on managers’ humor and empathy and invited them to become unofficial partners of Electric Castle. They will enjoy exposure on our dedicated platform and, more importantly, their employees’ gratitude.”

Calvin Harris to perform in Romania for the first time at SAGA Beach...