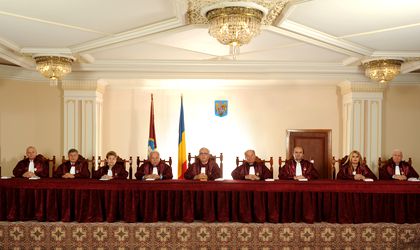 The Constitutional Court of Romania (CCR) has upheld the claim of unconstitutionality of the article defining abuse of power in the Criminal Code and indicated the way it can become constitutional.

It is not yet known if the courts will have to interpret the article in the manner indicated by the Court or whether it will be amended by the Parliament. On the other hand, the court ruled that the article in the special law 78/2000, under which many cases are being investigated by the National Anti-corruption Directorate (DNA), is constitutional.

Specifically, the Court ruled that the term “improperly”, included in the definition of abuse of office in the Criminal Code, should be replaced by the term “in violation of the law.”

As far as public officials are concerned, the offense of abuse of office is investigated on the basis of special law 78/2000, and not according to provisions of the Criminal Code.

When asked to comment on the outcome, Judge Augustin Zegrean, former President of the Constitutional Court, said the ruling was not helping “thieves”.

Prior to the CCR decision, Chief Prosecutor of the National Anti-corruption Directorate (DNA) Laura Codruta Kovesi warned that decriminalizing abuse of office would block 800 cases, representing almost half of corruption cases handled by anti-corruption prosecutors. Moreover, according to Kovesi, the move would also make it impossible to recover the damages incurred by people committing the offense of abuse of office, which last year only amounted to EUR 620 million.

Justice Minister Raluca Pruna also stated that decriminalizing any offense incriminated by criminal law means in practice that investigations in cases related to that offense will be halted.

Some of the cases under investigation where the claim of unconstitutionality of the definition of abuse of power was raised include those of former head of the Directorate for Investigating Organized Crime and Terrorism (DIICOT) Alina Bica, suspended president of the Constanta County Council Nicusor Constantinescu and former Braila County Council Gheorghe Brunea Stancu.