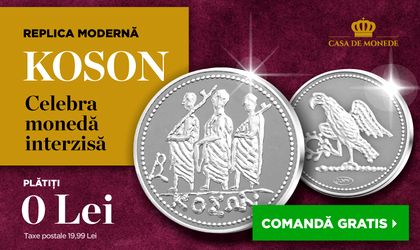 “Casa de Monede”, leader in the distribution of coins and commemorative medals on the Romanian market, launches a replica of the famous Dacian coin called koson, which has a tumultous and mysterious history, as it has been in the center of many scandals related to gold smuggling episodes.

The replica of this famous coin will be offered for free, in the order of registration on the campaign’s website, within the limit of one medal per family and the buyers will have to pay only the packaging and shipping costs. It was produced in a limited edition of only 50,000 pieces.

Theories about the origin of koson

The Koson coin created a lot of rumors and fueled people’s imagination with ideas of huge Dacian treasures, curses and colored fires burning upon the places where these treasures were supposed to be laying.

Even among historians, there are different theories about the origin of these antique coins. The most popular belongs to the historian Theodor Mommsen, who stated that “koson” is a gold coin issued by Marcus Iunius Brutus and used to pay the Dacian soldiers in his army.

Another theory links the coin to king Cotiso, the Dacian king who took the power after the assassination of their greatest leader, Burebista. According to this theory, the golden coin was named after the new king as his name appears on the coin – Koson.

Traditionally, a koson is a gold or silver stater, encountered in the Dacian geographical area, which is very strange, as there are no historical records of the Dacians minting any such coins and yet they exist in this specific area. How they appeared here remains an enigma.

According to history, during the Dacian kingdom, the gold was considered a thesaurus, God’s property and it was protected by the religious authority. It could be put at the disposal of the rulers, but only as a “loan from gods”.

The Romans found a large amount of gold in this area, but not the entire thesaurus. Many of the golden coins got lost and they started to appear more often after 1989.

Unfortunately, large batches of coins were taken out of the country and appeared on the black markets. Recently, the authorities’ interest in the Koson coin increased. Some of them were recovered by them and many were bought by the National Bank or by Romanian museums.

“Only a few coins in the world have a story as strong as the Dacian Koson. Starting with its unclear origin, through its mysterious name, to the inquest by Interpol, this ancient coin is really something special, which deserves the attention of all proud Romanians. For all of them Casa de Monede now offers the modern replica of this glorious Dacian coin for FREE as a tribute to the famous era of Dacian kingdom.” – stated Libor Veselý, General Manager – Casa de Monede.

The modern replica can be reserved on the official website www.kosoninterzis.ro or by phone, at 021 9787. Requests will be processed in the order of registration, within the available stock. Those who order the medal will have to pay only the cost of packaging and shipping, in the amount of 19.99 lei.

„Casa de Monede” is a leader in the distribution of collector coins and commemorative medals on the Romanian market and also it’s a registered supplier at the National Authority for Consumer Protection as seller of such items made of precious metals.