Cannes Festival: One gold, one silver and two bronzes for Romania at the last Galas 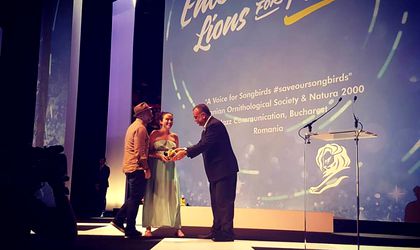 Romania had a good year at the Cannes Advertising Festival 2016. Out of the record 187 entries, 24 were shortlisted and 11 trophies have been won: 2 gold, 4 silver and 5 bronze

The independent agency Jazz Communication received a gold and walked on stage for the campaign , A Voice for Songbirds #SAVEOURSONGBIRDS”, for Romanian Ornithological Society and Natura 2000, at the Entertainment Gala.

Moreover, on the previous Gala, “Bittersweet Pies” from MRM / McCann Bucharest for Paul Restaurant took another bronze in the Media category and its first silver in Creative Data. The campaign has won 2 more bronzes earlier in the week, making it the one with the largest number of lions so far, with a total of 3 bronzes and 1 silver.

The other winner of the night also came from McCann: “Pay with Blood”, a blood donation campaign for UNTOLD Festival, which won a bronze in Media.

Jazz Communications won 1 gold for A Voice for Songbirds.