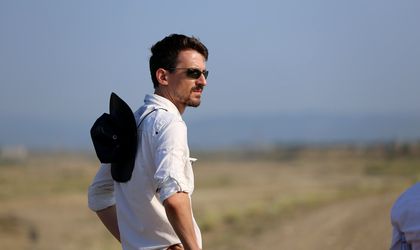 The first long-featured film by Romanian director Bogdan Mirica, Dogs / Câini, took last night the FIPRESCI award for Un Certain Regard section, after an entire week of good reviews from the international press.

“This unsettling moment may as well be Mirica’s answer to the iconic opening of “Blue Velvet,” in which David Lynch warns from the outset that he intends to pierce American suburbia’s white-picket veneer. Although “Dogs” takes place on an entirely different continent, it wields that same sinister sense of chipping away at whatever quaint, bucolic notion of rural Romania audiences may harbor,” notes Peter Debruge from Variety magazine.

After Cannes, the movie can be seen during Transylvania International Film Festival (TIFF), where it competes for Transylvania Trophy. The movie will be nationwide launched in this autumn in Romania.

Synopsis: Roman returns to the land near the border with Ukraine he has just inherited from his grandfather. Fully decided to sell this vast but desolate property, he is warned by the local cop that his grandfather was a local crime lord and his men will not let go of the land – and their smuggling business – without a fight.

The main roles are played by Dragos Bucur, Vlad Ivanov and Gheorghe Visu, while Romanian actors Teodor Corban, Raluca Aprodu, Costel Cascaval and Constantin Cojocaru can also be seen on the silver screen.

“Dogs is a rural police movie and an existential thriller, but also an anti-Western from the Balkans – a Molotov cocktail of genres, original and unpredictable, exploding nonchalantly in the garden of the New Wave. Probably the best Romanian debut since 12:08 East of Bucharest/ A fost sau n-a fost?,” describes it Mihai Chirilov, the artistic director of TIFF.