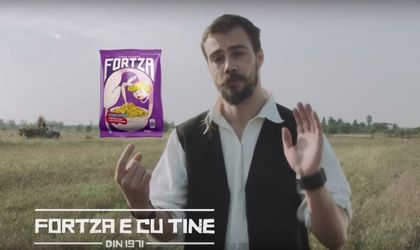 Jazz, Three and GMP Advertising & Webstyler the agencies’ top that have launched the most creative ideas of September, according to the members of the Art Directors Club Romania. Jazz came first in September’s raking with the highest score for the „Gustă partea bună a fortzei!” (Taste the good part of the Force), an idea developed for the Fortza brand. The team that worked for this campaign comprised Octavian Belintan, Alin Badiu // Art Directors and Andrei Stanciu // Copywriter.

“I love a lot the level of this campaign’s lack of seriousness and the voluntary or not humor of some situations. First of all, what does the peasant – photo model with the scythe in the corn field and, second of all, how come,,pârâcioasă-i mă..“ (she is such a teller)? I suppose it was a lot of fun both in the agency and at the client and that is what it takes for people not to run away from the commercials,” said Alex Strimbeanu, Creative Director JANDL & ADC Romania member.

The second place went to the agency Three and the idea for Banca Transilvania IMM Putere, (IMM Power), through which they continue the project “Bucurestiul Intreprinzator” (The Enterprising Bucharest). The campaign presents the stories of the people and the ideas that transformed Bucharest in the most enterprising city in Romania. The agency’s team was formed of: Francisc Zinz // Art Director & Sabin Staicu // Copywriter.

GMP Advertising & Webstyler finished the top 3 with the idea InstaCans, developed for the brand Coca-Cola. The project used the content generated by the Instagram users as images for the Coca-Cola cans. The team that worked on this campaign included: Alina Nedelcu, Sasha Tanase // Art Directors & Mihai Gongu and Bogdan Raileanu // Copywriters.