Labeling a EUR 20 million success. The story of a Romanian business who made simple become rich 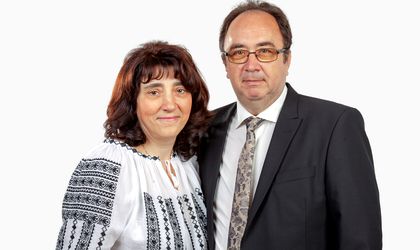 Fresh university graduates when the Romanian Revolution came in December 1989, Arnella Nechita – Rotta and Cristi Nechita-Rotta thought of creating a business that would resist all the challenges in the economy. They called it Sunimprof Rottarprint and founded it in Apahida, near Cluj-Napoca – their hometown.

In 1991, Arnella and her mother created the company that supplied labels to various companies across the company. They were joined by Cristi, Arnella’s husband. Their company covered 20 square meters and had a production capacity of 12,000 linear meters of print. From three employees in 1991, the company grew constantly reaching 252 employees and covering 6,780 square meters with an output of 117.37 million linear meters of print in 2017.

Now, the firm has a market share of over 33 percent in the flexographic printing market, working with clients of the likes of Albalact, Celestica and FrieslandCampina. It provides a wide array of products, ranging from printed self-adhesive labels, to ice cream paper cones, aluminum lids for dairy products and shrink sleeve labels.

“The idea was to make something that is used by everyone, be it peace or war,” says Arnella, on the start of the business.

“We started with 100 Deutche Marks – in the early 1990s there was a general euphoria. We started like some enthusiastic students, without a dime in our pockets,” she added. The spouses say that many of their friends started their own successful companies in that period.

The two worked for state-owned companies for a few years before the fall of the communism opened the doors for the creation of private firms.

Arnella was working at the Institute of Atomic Physics from Cluj as an engineer, while Cristi was a computer operator at the Center for Mining Computation Center. Right from the student years, they started to sell all kinds of manufactured products such as accessories, flowers and printed anniversary cards to make money.

“I always thought the business would get to this level. I was dreaming with my eyes opened and I was telling how it would be, I would imagine in detail the equipment, the number of people and how we would export and be known across the world,” says Arnella.

It seems that most of the ideas that she had in mind became reality. Right now, the family-owned business has four logistics centers in Romania, including in Bucharest and Brasov, as well as two branches in Hungary and southern Germany. The company plans to extend its footprint in Germany, by opening a new work point near Hamburg.

Expanding in Germany just before the start of the crisis in 2008 provided a lifeline for the company. “As the crisis unfolded, we came with fresh volumes from Germany (to cover the gap from the domestic market – e.n.). (…) This was not a strategy, it was luck,” said Cristi.

The company is also working for customers from Israel, Austria, Italy and is preparing its entry of the Spanish market. Overall, the international markets generate roughly one quarter of the yearly business.

The boom in domestic consumption is also helping growth, considering that large players out of the 800 customers in the portfolio come from the food industry. For this year, the company aims to grow its turnover by 10 percent and reach EUR 39 million by the end of 2021.

The transition from an ambitious start-up to a larger company came in the late ’90s, when the owners took out a bank loan of half a million dollars to buy equipment for expansion, paving the way for the start of an investment drive that continues to date. Right now, the company continues to work with the banking sector to secure funding, but has also tapped EU funds and other grant schemes.

Sunimprof Rottaprint has an investment plan of around EUR 21 – 22 million in the 2013-2021 period that focuses primarily on technological upgrades. The company is also planning investments in recycling operations.

Although firms in Transylvania are grappling with a tight labor market, with manufacturers struggling to fill vacant jobs, the business of the Rotta family doesn’t seem to be affected. The employee retention rate averages at more than 8 years and there are many people that have worked here for more than two decades. The constant training of employees is one of the factors that kept people on board, suggested the owners. The company created in 2008 its own flexographic typing school and has created mixed teams between senior and junior employees on the production halls.

Starting 2013, the company implemented the Kaizen management system in a bid to make the operations more efficient.

“Those that are just starting a business should have the courage to do and to focus on things that they do with pleasure. It shouldn’t be a burden what you do. We had this luck, that we always, right from the start, we did something that we liked.

We consult and we help each other, including in the decision making process. Arnella is more focused on production, investment, human resources, organization, while I am more on the commercial side and a little bit on the technical aspects,” said Cristi.