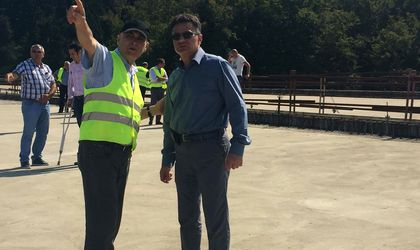 The minister of transport, Sorin Buse, announced that the construction firm of Suplacu de Barcau-Bors segment within the Transilvania highway project didn’t meet all the provisions of the contract and requested the head of the Spanish company responsible for the construction, to decide the future of the project, according to a release of the Ministry.

The construction of the segment was awarded to a consortium comprising Corsan SA – Corviam Construccion SA.

“The entrepreneur has gained his license approximately a year and a half ago, the National Company of Roads and National Highways from Romania (CNADR) issued the decision of starting the projection and execution of works in June 2015. However, the last version of the technical project was submitted for approval of CNADNR with delay, at the beginning of August 2016,” says the release.

The Ministry says that currently the builder doesn’t have any obstacles in finishing the segment. Moreover, CNADNR has given the down payment for the project and even if the entrepreneur promised to execute the project, it didn’t happen, the level of execution still being zero percent. Therefore, the Ministry says that the partnership cannot go on in these conditions.

“If until September 15 the construction firm doesn’t start the work at maximum capacity, we don’t eliminate the option of canceling the contract because we want this project to register progress,“ said Buse.