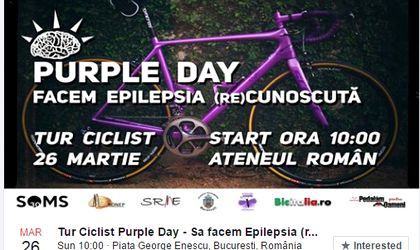 Moreover, to increase the impact of this campaign and to gain awareness within Bucharest citizens, SRIE needs funding for colouring some of the most important building from Bucharest in purple, the Romanian Athenaeum and Sutu Palace. For this event, the Unirii fountains will also have purple water. You can offer your support by contacting SRIE here.

About epilepsy in Romania

Nationwide, nearly one percent of the population has epilepsy (180 000 persons), out of each 70 percent has a normal life courtesy of affordable drugs, while 30 percent of them are suffering of a severe form (54 000 persons in Romania).

Epilepsy is a chronic disorder of the brain that affects people worldwide. It is characterized by recurrent seizures, which are brief episodes of involuntary movement that may involve a part of the body (partial) or the entire body (generalized), and are sometimes accompanied by loss of consciousness and control of bowel or bladder function, explains World Health Organization (WHO).

According to them, approximately 50 million people worldwide have epilepsy, making it one of the most common neurological diseases globally. Nearly 80% of the people with epilepsy live in low- and middle-income countries, and about three fourths of people with epilepsy living in low- and middle- income countries do not get the treatment they need, notes WHO.

Epilepsy is one of the world’s oldest recognized conditions, with written records dating back to 4000 BC. Fear, misunderstanding, discrimination and social stigma have surrounded epilepsy for centuries. This stigma continues in many countries today and can impact on the quality of life for people with the disorder and their families, concludes WHO.