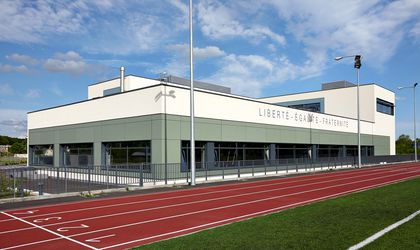 10,000 children educated, 10 million classes taught and countless personalities formed by the French high school in 100 years. Founded in 1920 in Romania and named after Romanian-born writer Anna, countess of Noailles, the school prides itself on the pupils’ outstanding exam results, with nearly 100% passing the Baccalaureate exam and continuing their studies at Universities in Europe. Accredited by the Ministry of Education, it belongs to the largest school network in the world: AEFE (Agency for French Education Abroad).

Lycée Français Anna de Noailles, one of the largest international schools in Bucharest, celebrates 100 years dedicated to creating a haven of academic excellence that provides multicultural education for children with 23 different nationalities. Since opening its doors in Romania, the school has educated more than 10,000 students and taught over 10 million classes, and today it benefits from a state-of-the-art campus that integrates the newest technologies into everyday classes.

The French High School teaches five languages: mandatory French, Romanian and English and a choice between Spanish and German starting from the 5th grade. Over 98% of pupils pass the Baccalaureate exam, compared to the French average of little over 80% and the Romanian one of 67%.

Most of the graduates opt for French universities where they have guaranteed spots (57%), or institutions in The Netherlands (14%), Switzerland (9%), Romania (7%), the United Kingdom (7%) or Spain (4%). Many attend some of the world’s top universities, such as HEC, École Polytechnique and London School of Economics, since the French baccalaureate is recognized worldwide, including in North America, UK and the EU.

“We encourage the personal growth of our pupils and prepare them to become citizens of the world, by developing their autonomy, pleasure of learning and critical thinking abilities and allowing them access to the best schools and world universities. We pride ourselves with providing excellence in teaching, a claim supported by the children’s top results in school exams, as well as their outstanding achievements later in life, with many becoming notable members of society. We are proud to be more than a school, but also a trustworthy partner responsible for a vital period of their lives, and judging by our active alumni association that built a close-knit community, they also value our dedication”, noted Carole Soulagnes, Principal of Lycée Français Anna de Noailles.

Lycée Français Anna de Noailles proposes continuity from kindergarten to high school, following French programs taught by a large majority of certified teachers and French native speakers, within the largest network in the world, The Agency for French Education Abroad, uniting 522 schools from 139 countries. Tuition ranges from €500 to 600/month, and extra services include transportation throughout the city and surroundings, a canteen that prepares 1,000 daily balanced and varied meals, validated by a French nutritionist, and an afterschool with nearly 50 weekly sports and cultural or artistic activities.

In 2013, the school moved to a new compound on Bucuresti-Ploiesti Road 160A, close to the Baneasa and Pipera family neighborhoods, built in accordance with both Romanian and French standards. It has since become a model for future educational establishments, due to its great attention to detail and functionality. The school buildings have a surface of 13,500 m2, being built on 2,4 ha of land, and the gym hall alone covers 1,000 m2.

The school was founded in the interwar period, when the city, known as Little Paris, needed a school to provide the highest quality of education to the children of expats. Named after celebrated Romanian-born author Anna, countess of Noailles, born Ana Elisabeta Brâncoveanu, the school prides itself in its keen focus on cultural integration and diversity. Today, about 45% of pupils are Romanian, 45% French and the others originate from over 20 different nationalities.