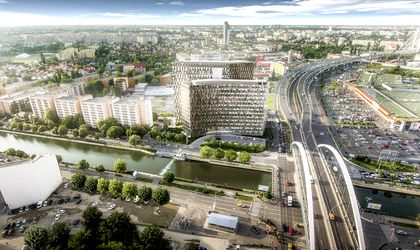 The total stock of buildings in Bucharest reached 2.71 million sqm at the end of H1 2018. New supply amounted approximately 28,000 sqm in the first half of the year, consisting of the second tower of Globalworth Campus from Pipera, this being one of the lowest supply levels in recent times.

When it comes to H2 2018, more than 175,000 sqm of office space are expected to be completed and the west sub-market will attract more than half of the space currently under construction.

The west area accounts for 40 percent of the total volume recorded, followed by the central area (19.6 percent) and central north (14.4 percent). In terms of pre-lease activity, the office buildings under construction in the west area attracted around 70 percent of the demand, where the major projects due to be delivered in H2 2018 are almost fully leased.

In H1 2018, demand for office space in Bucharest continued to be strong, with around 150,000 sqm being transacted throughout that period.
Pre-leases account for 43 percent from the total volume of transactions, while renewals account for 18.6 percent. New operations (18.4 percent), expansions (10 percent) and relocations (10 percent – almost equally divided between old and new stock) complete the transactional table from H1 2018.

Technology and Telecommunications companies were the most active tenants in H1 2018, with a share of 30 percent from the net take-up recorded, followed by Oil and Gas, with 13.5 percent and Office hubs – 13.4 percent. This is the first semester when office hubs generate more than 10 percent of the transaction volume in Bucharest, mainly due to the market entrance of Mindspace and Spaces, companies who secured 18,000 sqm of office space in five different buildings.

Since demand continued to be consistent and the level of new supply quite limited compared with the previous year, the vacancy rate in Bucharest maintained below 8 percent. At the end of H1 2018, the general vacancy rate was of 7.7 percent. Looking at sub-market performance, the lowest vacancy rates are recorded in the Central North area – 3 percent, followed by CBD – 4.3 percent and West – 4.5 percent.

In H1 2018, new supply was quite limited compared with the previous semester, given that some projects were postponed for the second part of the year. Thus, during this year, we expect a volume of over 200,000 sqm of office space to be completed. The total stock will reach 2.9 milion sqm, while the 3 million sqm threshold will be surpassed in H1 2019.

More than half of the projects currently under construction are located in the West submarket, where projects such as Orhideea Towers, Campus 6.1, The Bridge II and AFI Tech Park are expected to be delivered by the end of the year.