Bucharest judge: ‘When democracy and fundamental freedoms are in jeopardy, the judge’s duty to be reserved becomes subsidiary to the obligation to be indignant’ 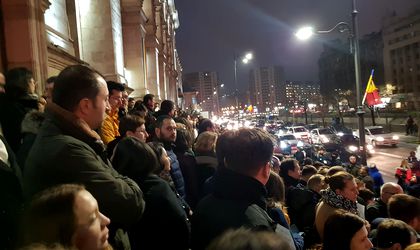 On Monday, 700 judges and prosecutors stood on the steps of the Palace of Justice in Bucharest in a silent protest against the proposed changes to the judiciary, currently under debate by the Romanian Parliament. In an exclusive interview, one of the participants, a Bucharest judge who wishes to remain anonymous, criticises heavily the initiative by the Romanian Government to change the laws of justice, saying it is not endorsed by most Romanian magistrates, who reject it and, moreover it contradicts Romania’s interests as well as the recommendations of the Report of the Cooperation and Verification Mechanism, Romania is still a subject of.

Why did you decide to protest together with your colleagues, and why now? Was it difficult to convince such a large number of judges to take part in the protest?

The act of the approximately 700 judges and prosecutors seems to be a most unusual one. As a rule, magistrates are silent, and express themselves through the decisions or documents they issue, and less in the agora. This is a genuine public statement of the independence of the judiciary system, but not a change of attitude, while the rejection of the laws of justice was a continuous coordinate.

Throughout October 2017, approximately 4,000 Romanian judges and prosecutors, representing more than half than their total number, stood behind the ‘Memorandum to withdraw the draft amendment to the “justice laws” addressed to the Romanian Government, and in November 2017, over 90 percent of the general assemblies in the Romanian courts and prosecutors’ offices opposed the current drafts of amendments to the laws of justice under parliamentary debate. Therefore, probably over 6,000 Romanian judges and prosecutors do not accept these retrograde projects to amend the laws of justice.

We are now at a tipping point. That is why, the nearly 700 magistrates and colleagues who protested on the steps of the Bucharest Palace of Justice did not need to be convinced, instead they came out to expressed their extreme will in order to make the Parliament aware of the absurdity of the current situation.

What is your message to the decision-makers, who are about to make the proposed changes to the judiciary?

The parliamentary debate taking place these days regarding the justice laws is ignoring the point of view of the overwhelming majority of the magistrates and the repeated negative opinions issued by the Plenum of the Superior Council of Magistracy, and so the laws adopted this way will be from the outset incompatible with the fundamental law.

Consequently, the only logical solution is to reject immediately the current initiative and to resume the process of drafting a solid project within the Ministry of Justice. The Superior Council of Magistracy should ask for this  right now as a matter or urgency.

Concering Romania, the latest Report of the Cooperation and Verification Mechanism (2017) expressly recommends, “for further improvement of transparency and predictability of the legislative process, as well as for strengthening the internal guarantees of irreversibility”,  that “the Romanian Government and Parliament (…) should ensure full transparency and take into due account of consultations with relevant authorities and interested parties in decision-making and legislative work related to the Criminal Code and the Criminal Procedure Code, anti-corruption laws, (incompatibilities, conflicts of interest, illicit wealth), the laws of justice (relating to the organization of the justice system), as well as the Civil Code and the Civil Procedure Code.”

What are in your opinion, the most negative consequences of the proposed changes?

Firstly, removing the meritocratic promotion in courts and prosecutor’s offices (replacing the tough promotion competition with a highly non-transparent and subjective assessment of judicial acts).

Currently, the promotion system involves an exam focused in principle on a written test, in which predefined answers are being drawn, some correct, other incorrect ones are signalled. The examinee would have to pick the correct answer. The degree of difficulty is high and the competition is also high, often reaching up to 8 or 10 candidates for one place. This form of examination has the advantage that reduces subjectivity of the assessment. Knowing that such a system is not perfect, however, in the organisational context of contemporary Romanian society, it ensured a meritocratic promotion to higher levels of the judiciary (except the High Court of Cassation and Justice – the highest court, where the promotion system is different) as long as the examiner’s subjectivity could no longer be manifested. In essence, the papers are assessed using a computer program. The new proposed system of promotion aims to change the examining philosophy by introducing an analysis of candidates’ papers from a certain period of time before the exam, and also by inserting an interview that the candidate has to pass before a commission set up at every court of appeal, each commission being composed of different persons. In such a system where the evaluation will be made by different persons in different commissions, it will be difficult to have uniformity of evaluation.

Secondly, the creation of a specialised section within the Public Prosecutor’s Office attached to the High Court of Cassation and Justice, having as object the criminal investigation of the magistrates.

This is a measure that conveys to the public a feeling of mistrust in the efficiency of the current legislation and at the same time can prove to be an instrument of pressure on magistrates if the guarantees of organising such a structure are not transparent and effective. The problem from this point of view is that it is creating a wrong image for the magistracy, first of all. It induces the idea that the phenomenon of corruption exists within this professional category more than in others, since there are no specialised directions for doctors, teachers, parliamentarians, etc. In the Romanian system there are specialised departments for criminal investigations, but these are related to facts / crimes, and not to professional categories. For example, there is the National Anti-Corruption Directorate investigating corruption, no matter who is involved in it.

Thirdly, the express prohibition of “defamation” by magistrates of other state powers

The term “defamation” has so many meanings in the Explanatory Dictionary of the Romanian language that, in legal terms, it is an unpredictable and imprecisely defined concept, and therefore, unconstitutional. In principle, any normative act must meet certain qualitative conditions, including predictability, which implies that it must be sufficiently precise and clear to be applied.

How will the proposed changes affect your work?

All these changes will affect the career and professional activity of magistrates for a long time and will cause imbalances in the judiciary system, which have been repeatedly condemned by the European Commission, and there is the risk of a wave of dissatisfaction within the professional body.

Contrary to the recommendations of the Co-operation and Verification Mechanism, the Superior Council of Magistracy has not taken any further steps to provide adequate support to the magistrates, who criticised it on grounds that it undermines the independence of the judiciary system. The Chief Prosecutor of the National Anti-corruption Directorate is blamed by the television channels whose owners are convicted for high-profile crime.

Do you suspect the ruling coalition of following its own agenda and interests under the pretext of transposing into national law a European directive?

I cannot answer this question, because it would imply that I am criticising certain well-defined parties. Although the interview is anonymous, this is a question I cannot answer.

Did you feel any political pressure or backlash after the protest?

There have been public statements by certain politicians who cannot imagine that a magistrate, is, firsta nd foremost, a citizen, and can protest at any time in favour of the rule of law.

The most outrageous was the public statement by the Spokesperson of the Bucharest Court of Appeal, the court that is housed in the Palace of Justice, on whose front steps took place the Bucharest protest. The Information and Public Relation Office does not have among its attributions that to express the personal opinion of the magistrates, without their consent.

Have you ever taken part in protests as a magistrate? Are they legal? Will you protest again?

When democracy and fundamental freedoms are in jeopardy, the judge’s duty to be reserved becomes subsidiary to the obligation to be indignant at that. (See the Declaration on Judicial Ethics, adopted by the General Assembly of the European Network of Judicial Councils, held in London on June 2-4, 2010). When it comes to issues that affect the judicial system, magistrates and also citizens agree that protesting could be a legitimate way to solve the problem. This could be explained by the fact the people perceive the issues that affect the judiciary as public matters deeply related to the well functioning of the society as a whole.