BR’s 17 leaders to watch: Power to the people 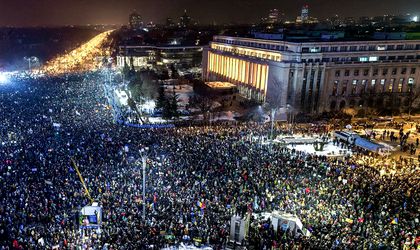 Large-scale protests have forced the Romanian government to scrap a hastily passed decree, seen by many as nothing more than a thinly veiled attempt to protect corrupt politicians.

Less than one hour after the Romanian government passed an emergency ordinance on January 31 that would have partially decriminalized low-level government corruption, citizens started gathering outside the government headquarters in Bucharest’s Victoria Square in the middle of the night. Over the coming days they were joined by tens of thousands more, voicing their discontent and anger over the perceived stymieing of the fight against corruption, an issue that has dominated Romanian politics for years.  Specifically, the protesters’ main complaint was that the decree would have protected many politicians from being prosecuted for corruption, including the head of the ruling PSD, Liviu Dragnea, who is on trial in an abuse of power case. The country’s main anti-graft directorate, the DNA, was working this February on over 2,000 cases involving abuse of office offences and its chief prosecutor, Laura Codruta Kovesi, warned that such changes to the Criminal Code could wipe out a large share of these cases. Chanting their discontent with slogans such as “at night just like thieves”, “the DNA should come and pick you up” and “day by day we will be here”, brandishing witty self-made posters and even effigies of political figures, jumping to keep warm in the sub-zero temperatures and at times singing and dancing, Romanians took to the street for weeks in a row. It all peaked on February 5, when the protests are estimated to have brought half a million people out in the capital and across dozens of cities and towns throughout the country. This marked the largest protests in Romania since the fall of communism.

While the now infamous Emergency Ordinance No. 13 acted as a catalyst, the rallies have gone beyond that, conveying outrage with what many perceive as a self-serving political class and their old-school political shenanigans more typical of the tumultuous 90s than of an EU member state. This makes Romania’s newly discovered civic voice a factor to watch this year.

The government has blamed the protests on poor communication, members of the public allowing themselves to be manipulated and even the interference of the president, Klaus Iohannis, but the unexpected and mounting public backlash finally forced the PM, Sorin Grindeanu, to begrudgingly repeal the decree one week later.  For now the worst of the political crisis seems to have been weathered, given that Parliament was expected to vote through a separate emergency government ordinance that would cancel the one approved in late January. However, the repeal and the subsequent resignation of the justice minister, Florin Iordache, did little to stem the demonstrators’ anger. Many continued to gather in Piata Victoriei, some calling for the resignation of the Grindeanu government, which has been in office only since the beginning of the year and whose future now looks uncertain. Regardless of how events unfold in the coming weeks and what the political outcome of these street protests will be, once thing has become clear. Romanians, and the younger generation in particular, can overcome their apathy with the political elite and speak out against breaches of rule of law. And this is welcome news for any functional democracy.