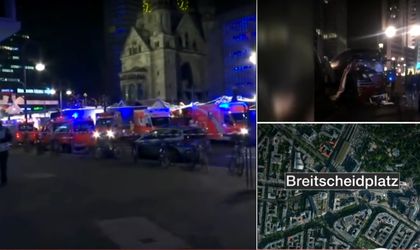 The Romanian Ministry of Foreign Affairs said it was looking to see if Romanian citizens were affected after a truck rammed into a Christmas fair in Berlin, on Monday evening, killing 12 and injuring 48 people.

“The representatives of the diplomatic mission got in contact with the local authorities to check if Romanian citizens have been affected,” stated the MAE, according to Agerpres newswire. The Ministry added that it would continue to monitor the situation in Germany.

According to media reports, a heavy truck, which had Polish number plates, ploughed through a crowd that was gathered in the center of Berlin for a Christmas festival. The suspected driver has been detained and another person was found dead, in the right seat of the truck.

The Police in Berlin said it was treating the incident as a “probable terrorist attack”.

Meanwhile, the Romanian commissioner for regional policy, Corina Cretu, wrote on her Facebook page that the attack in Berlin “shows once again the tough times that we are going through and how much we are mistaking when we forget about values such as solidarity, respect, tolerance”.

The attack was claimed by the terrorist group ISIS.