Belgian Embassy: ‘You are welcome’ after protesters thank foreign embassies 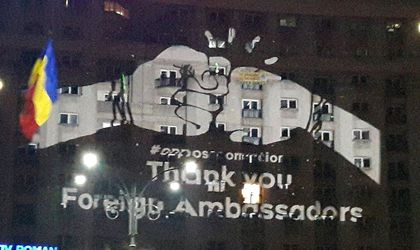 On Monday the Embassy of Belgium in Romania posted on its Facebook account the message ‘You are welcome 🙂 ‘, alongside a picture taken in Victoria Square during protests that shows the message ‘Thank you Foreign Ambassadors’. Protesters used laser projectors during the rally to project on the buildings anti-corruption slogans and thank you messages.

Belgium is one of the six embassies that issued a message expressing concern at the conduct of the Romanian government, which amended the Criminal Codes via emergency ordinance and partially decriminalized the offense os abuse of office.

In a message titled ‘Major Partner Countries Call on the Government of Romania not to Reverse its Fight Against Corruption,‘ the Embassies of Belgium, Canada, France, Germany, Netherlands and the United States released the following statement:

“We, Romania’s international partners and allies, express our profound concern at the actions of the Romanian Government on the night of January 31, 2017, which have undermined Romania’s progress on rule of law and the fight against corruption over the past ten years. This act, in contravention to the collective wisdom of the entire judicial and rule of law community, credible elements of civil society, and the demonstrated concerns of Romanian citizens over the past two weeks, can only undermine Romania’s standing in the international community and risks damaging partnerships that are based on common values, inherent in the guiding principles of the EU and NATO. We hope the Government of Romania will reverse this unhelpful course. While amendments to existing laws and procedures are occasionally necessary, these changes should be made only in the process of comprehensive and credible consultation with all stakeholders.