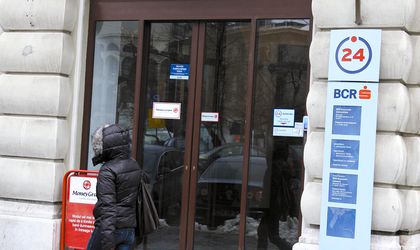 The net trading result moved up by 49.5 percent to RON 266.8 million (EUR 60.8 million), driven by gains in foreign exchange transactions.

The operating expenses fell by 6.9 percent y/y to RON 807.3 million (EUR 183.9 million), although the lender continued to invest in staff training and internet and card channels.

The cost/income ratio increased to 40.1 percent this June from 40.9 percent last year.

BCR is currently grappling with a rise in NPLs that reached 24.6 percent of the total loan portfolio by June. Most of the bad loans are generated in the corporate sector. The real estate and SMEs have been mostly hit by the sluggish economy.

In response, the lender has almost doubled the net charge with risk provisions for loans and advances to RON 1.7 billion (EUR 401 million) and increased the coverage of NPLs to 53.7 percent.

BCR’s volume of aggregate loans to customers before provisioning increased by 2.8 percent to RON 54.8 billion (EUR 12.3 billion) and allowed the lender to maintain its leading market share of 21 percent. However, customer deposits lost 1.1 percent to RON 39.2 billion (EUR 8.8 billion). This remains BCR’s main funding source, along with support from the parent bank.

The lender’s Tier 1+2 capital ratio stand at 12.65 percent above the 10 percent required by the central bank and the solvency ratio stands at 16.95 percent.

Tomas Spurny, CEO of BCR, said the lender will make every effort to reverse the “disappointing results”, adding that a series of measures have already been executed and this will continue in the second semester.

Erste Group reported a 12.9 percent fall in net profit to EUR 453.6 million in the first semester.