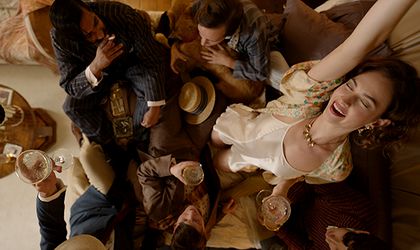 BBC Studios announced today the launch of BBC FIRST with DIGI, one of the largest telecommunications operators in Romania, marking the first time the premium British drama channel has been available in the market. BBC First will join factual channel BBC Earth, already available on DIGI platform and will be available to all subscribers as part of the basic package.

BBC FIRST will offer Romanian viewers passionate about British drama access to the original, premium and best-loved productions from UK featuring an array of famous faces and created by award-winning talent. Unforgettable stories that challenge, immerse and entertain and told from a distinctly British perspective such as Time, The Pursuit of Love, Ragdoll, This is Going to Hurt –– are available to viewers from 12th of October.

The channel launches with a raft of critically acclaimed series including the star studded romantic comedy drama The Pursuit of Love (from November 23 at 21:30) with Lily James (Linda), Emily Beecham (Fanny), Dominic West and Andrew Scott as leading actors. Adapted and directed by award-winning actor Emily Mortimer series tells a story of two cousins Linda Radlett and Fanny Log growing up in the roaring 1920s, that defy all expectations by diving headlong into every experience that life – and love – has to offer.

Also in November viewers will be able to enjoy The Cleaner (from November 12, at 21:30) with BAFTA-winner Greg Davies as a writer and a main character (Wicky) in a truly arresting comedy based on the multi-award-winning German cult hit Der Tatortreiniger. Wicky is a crime scene cleaner. His job brings him into contact with the strangest people: those who knew the victims, and sometimes even the killers themselves. But because he’s a chatty man, he tends to gossip rather more than he cleans.

December will bring to the channel premieres of Chelsea Detective (from December 12 at 21:30) a contemporary crime series set in London’s glamorous district and the 24th season of Silent Witness (December 6 at 21:30) – Britain’s longest-running crime series currently on TV, with Emilia Fox as Dr Nikki Alexander Home Office pathologist who together with her team have a mission to reveal the truth behind the murders and accidental deaths that bring each ‘silent witness’ to their morgue.

In early 2023 audiences can expect such great titles as Time, a powerful depiction of prison life, starring Emmy and BAFTA winner Sean Bean, and four-time BAFTA nominee Stephen Graham. Authored by Emmy and three-time BAFTA-winning writer Jimmy McGovern; as well as Ragdoll, a stylish psychological thriller from the makers of Killing Eve.

Later in the year BBC First will premiere: Beyond Paradise, a spin-off of audiences beloved light crime series Death in Paradise; Sherwood, a politically pertinent thriller about a community torn apart by two shocking killings and This is going to Hurt, an adaptation of Adam Kay’s bestselling memoir about life as a junior doctor with Golden Globe, Emmy and BAFTA winner Ben Whishaw as the main star.

The line-up of the channel will see the biggest premiering titles sit along new seasons of audiences’ favorite Father Brown, Call the Midwife and Death in Paradise. All programming will be available in English with Romanian subtitles.

“British drama is blossoming without a doubt, and BBC Studios proudly leads the way involving the very best talent from writers and creators, to those behind and in front of the cameras. There couldn’t be a better time to introduce premium British drama channel to Romanian viewers and I’m delighted we are doing it together with such a respectable partner as DIGI”.