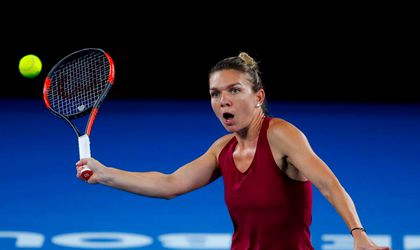 Romanian tennis player and WTA No 1 Simona Halep showed no health constraints in her straight sets victory, 6-2, 6-2, over Canada’s Eugenie Bouchard and moved tot the third round of the Australian Open.

Halep rolled her ankle in her first round match against Australian teenager Destanee Aiava, which she defeated 7-6, 6-1, and was still experiencing pain one day before her second round match, according to coach Darren Cahill.

However, the Romanian sprinted to victory in her second match of the tournament, while facing the world No 112, who struggled with her serve and was broken seven times. “I felt the ball pretty well, it’s always tough to play her as she hits the ball tough and plays close to the baseline,” Halep said after the match, without downplaying her injury. “I just want to enjoy the time here even though I’m injured. I feel the pain but I didn’t think about it. I just wanted to play the match and win it.”

“I don’t feel the pressure of being world No 1,” she added. “I expect tough matches, I just want to win every time I go out on the court. Nothing else is on my mind.”

Halep will meet Lauren Davis in her third round match, the world No 76.

Ana Bogdan is also through to the third round after defeating Yulia Putintseva in three sets, 1-6, 6-2, 6-3.

Sorana Cirstea lost her second round match to Lucie Safarova, 6-2,6-4.