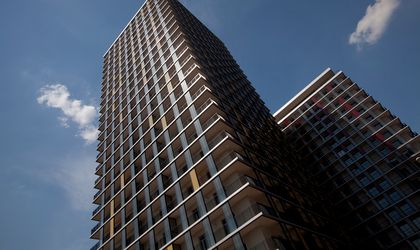 Insolvent Asmita Gardens hopes to get around EUR 45 million for the last batch of 361 apartments delivered last week, after lowering its expectations to EUR 900-950 per sqm. The company’s debts, however, amount to EUR 110 million and there is no positive sign for the market on the horizon.

Back in 2007 the pre-sale rate of apartments in the high-rise apartment tower complex Asmita Gardens in Bucharest reached one flat a day. Generously spaced one-bedroom apartments came with a price tag of up to EUR 130,000 but, even so, the upward trend seemed like a one-way street. Come the crisis, and the Asmita Gardens complex story has become a cautionary case study of the rise and fall of the local residential market. The project, which at EUR 127 million invested and 758 apartments built is the largest residential real estate investment in Bucharest, was officially delivered last week although the construction of the seven towers was completed two years ago.

Asmita Gardens is owned in equal share by Indian company Asmita and the Charlemagne investment fund. It went insolvent in November 2011 following construction litigation with the project’s general contractor, Austrian Strabag. That year, Asmita Gardens posted RON 183 million of losses, according to Remus Borza, managing partner of Euro Insol, the project’s judicial administrator. It hadn’t sold a single apartment since October 2010, he disclosed.

Since November 2011, 34 apartments have been sold, a satisfactory rate, thinks Borza, given the general market conditions. At present about five apartments are sold each month but the figure can reach eight, he added. While prior to the crisis the price per square meter was EUR 1,600, the company has now lowered its expectations to around EUR 900-950 per sqm. Given that there are 361 apartments in the project, Borza estimates that their sale could bring in about EUR 45 million.

However,Asmita Gardens has EUR 110 million of debt. Its largest creditor is the local branch of Greek Alpha Bank, which is owed EUR 70 million, followed by the two owners with EUR 16 million each. “Obviously, everyone stands to lose money,” said Borza, adding that only Alpha Bank can recover some share of the debt, although in his opinion it will be “a far cry” from the initial figure invested and not taking interest into account.

Present at the press conference to mark the inauguration event, Periklis Voulgaris, vice-president of corporate banking at Alpha Bank Romania, was more optimistic and said his bank hopes to recover all of the debt. In his opinion prices could go up even through at present there isn’t much of a market outside the Prima Casa scheme, as there are no new projects in the pipeline. In order to stimulate the interest of prospective buyers, Alpha Bank is preparing a special credit product, added Voulgaris.

The Asmita Gardens project is located near the Dambovita River, in south-east Bucharest. The complex consists of seven towers, five of which are 16 floors high, one reaches 20 floors and one 24 floors with a total surface of 70,000 sqm. Prices for the remaining flats start at EUR 52,000 for a studio and reach EUR 200,000 for three-bedroom apartments. The complex also features penthouses, commercial spaces and underground parking.

The next step in the project’s insolvency case will be for Euro Insol and Alpha Bank to file the reorganization plan within 30 days of filing the final table of claims which should happen next week, said Borza said.

Flat future for the residential market

There isn’t much room for optimism when it comes to the evolution of the real estate market this year, players agree. The prices of new apartments in Bucharest will most likely continue to tumble throughout 2012, falling even further after having decreased on average by 4 percent in the first quarter of this year, according to a Jones Lang LaSalle report.

“In Q1 2012, the average price on the primary market of Bucharest experienced a decrease of 4 percent quarter on quarter. While 2011 was characterized by slight ups and downs in the market average, the price development in 2012 is expected to see a more pronounced correction,” reads the report.

The latest data from the National Statistics Institute confirm the trend. At a national level, the number of newly constructed housing developments dropped 11 percent in the first quarter of this year against the same period of 2011. For Bucharest and Ilfov county, the decline was even more pronounced with a 26 percent decrease.