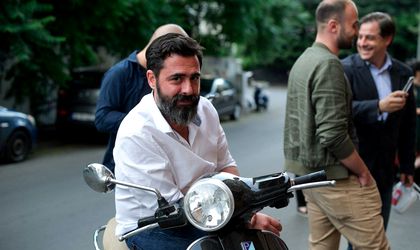 BR talked with Andrei Bortun, CEO of The Institute, to find out more about the fifth Romanian Design Week taking place between May 20 – 28. Bortun also tells us the story of Bucharest’s Creative Quarter.

How was Creative Quarter launched and how did it transform into what it is today?

Bucharest’s creative industries have lately succeeded in proving their potential in gathering communities and consumers alike by means of generating both content and effervescence. Starting from the premises that what we’ve been witnessing for the past few years is only the tip of the iceberg, we took into our own hands the catalyzing process by mapping stakeholders, put everybody in contact with each other in order to coagulate an entire community to attract even more content creators and consumers and, ultimately, to find together solutions for accelerating all these interactions. By simply acknowledging effects triggered by similar projects in some other cities in Europe which we have been following, we noticed that creative communities involvement in revitalizing some urban areas have always had the most positive impact in economic development.

Please tell us more about the concept

Creative Quarter is located within the historical area of Cismigiu Garden and has as highlights Queen Elisabeth Boulevard (the former Cinemas’ boulevard, Grivitei Highway and Matache Square). Even without an in depth research, this areas’ emerging potential and the fast pace development registered in the past few years could be easily observed. Workshops, creative boutiques, studios, bars and coffee shops have been opening, thus becoming the preferred residency to content creators so that areas’ specific social network is open to an accelerated paced development.

Moreover, the area has three strong points regarding the infrastructure: it benefits of a strong historical commercial heritage (many streets have commercial spaces at the buildings’ ground floor), unmapped and unused in commercial circuits as yet and the prices for both renting or buying are far from being high.

Bucharest’s Creative Quarter is a space that capitalizes on creative industries’ both energies and entrepreneurial potential. Creative Quarter is a creative communities’ energetically out bursting epicenter that overleaps a territory already enjoying both a long history and a strong infrastructure necessary to catalyze and accelerate the cultural and creative ecosystem’s engines. Creative Quarter gathers creative businesses, artists, organizations and cultural institutions in order to further generate better conditions for creativity, production, distribution and entertainment. Creative Quarter’s mission is to function according to similar successful projects developed in Scandinavia or in the UK

How would you characterize the Romanian design industry at this moment?

I would definitely say there are amazingly creative people that against all odds have registered international success and recognition, however, without a “system that works” a working infrastructure and a regulated local market as elsewhere in Europe. To put it bluntly we have a relevant design scene without having a market, really. It is one of Creative Quarter’s main objectives to ultimately open more art and design galleries, stores and showrooms, workshops as Creative Quarter highlights its resident’s activities, on one hand and coagulates Bucharest’s creative community on the other by consolidating a strong infrastructure in the benefit of creative entrepreneurship and audiences’ growth and diversification.

What are the criteria for choosing your partners?

Common values are decisive, of course, and a similar universe of interests. It is also highly important for us that our projects are relevant for brand’s essence and in line with corporate mission’s DNA as we create projects for the long run in the benefit of all parties involved: partners, creatives and general public alike.

In order to present highly innovative content to the public, there are plenty of aspects involved from the creative concept to choosing locations and inviting guests, organizing openings and parties. For instance, without ING Bank’s support we couldn’t have put together the ReDesign & Crafts exhibition, without the space offered by Mega Image, we couldn’t have had a new, unseen before exhibition space. Moreover, The Institute, as a platform, enjoys the support of Absolut, Ciuc and Tastemakers.

What inspires you in choosing the locations every year?

For the time being, the need, I should say, unfortunately, as there aren’t almost any spaces in Bucharest ready to host big scaled events such as RDW or the like which forces us to heavily invest both in terms of financial and human resources in refurbishing, repairing and adapting certain spaces instead of targeting all these efforts and resources towards content and communication.

Probably, public administration will start thinking of viable solutions to improve city’s infrastructure for the better, or, the business community will seize this opportunity to invest in a polyvalent hall. There’s also the western model where one company or some brand interested in the cultural and creative universe invests in such a space as there’s need: events taking place each year in Bucharest are the proof. For all RDW’s editions, together with our partners, we put into the spotlight a central location highly appreciated and heavily used afterwards. This year, for the anniversary edition of RDW we have the support of Mega Image that offered us the possibility to use their location on 45, Cobalcescu Street, right into the heart of the Creative Quarter, before turning it into a concept store.

What are you bringing new in concept and idea this year?

One of Romanian Design Weeks’ priorities is to discover and promote design projects that could stand out at an international level by capitalizing on Romanian local specific, be it in terms of materials used, techniques or functionality. ReDesign Crafts, organized together with ING (our partner since the first RDW) this year’s flagship RDW exhibition, focuses on traditional crafts’ presence in contemporary design by showcasing how innovation could preserve traditional techniques. It reunites six successful initiatives that prove the dialogue between crafts and design translates into creativity: Meșteshukar ButiQ, Deltacraft, Patzaikin, KrafMade, Honest Goods and Batem fierul la conac! (We forge iron at the Mannor!) and the stories behind these projects are just a glimpse of what „Creative Tradition’s Romania” means. The outcomes of this years’ main exhibition, ReDesign and Crafts have determined ING together with The Institute to launch a call for the next craft.

Who will the international guests be at RDW 2017 and how did you choose them?

Netherlands and Hungary are the countries present to this edition. In partnership with The Netherlands’ Embassy in Bucharest, RDW presents this years’ graduation collections of students from Fashion Design ArtEZ of Arts University (Arnhem) curated together with those of our local students from Fashion Department of National University of Arts from Bucharest. “ Shaping Hungary: Design in the 21st Century” exhibition presents today’s designers, inventors and engineers projects, confirming they are worthy successors to the 20th-century generation that laid the foundations of Hungarian creative industries. Conferences held during RDW enjoy the presence of distinguished speakers as the ones that are to talk about creative Quarters in their countries and it is just an example. There are also journalists from Denmark, Italy, Netherlands and UK.

What are the events that you are looking the most forward to this year?

This month, May, is simply amazing as we have the opportunity to enjoy ArtSafari, Autor and RDW, Bucharest Biennale and Unfinished. Personally, I am also looking forward to Summer Well in August, Diploma in October and everything Creative Quarter has to offer throughout the year.

What should people must know about RDW 2017?

This years’ anniversary edition theme proposed by The Institute together with ING Bank is centered on the idea of traditional crafts’ presence in contemporary design by showcasing how innovation could preserve traditional techniques, hence main exhibition’s name: ReDesign and Crafts. We’ve also launched Creative Quarter as a space that capitalizes on creative industries’ both energies and entrepreneurial potential with the aim of further encourage creative industries development.  For more details regarding the Romanian Design Week schedule as well as for the other happenings connected, I invite you to visit our website www.institute.ro