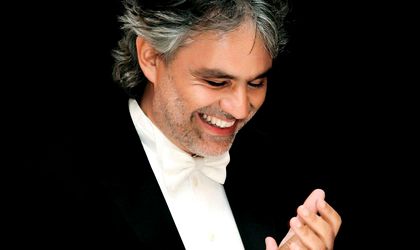 The Italian tenor Andrea Bocelli will come back in Romania to hold a concert in Bucharest on June 22 2017 and then in Cluj on June 25. He will sing both opera songs as well as different interpretations of his hits.

The first part of the concert will comprise known opera arias while in the second part he will song his newest songs from the albums „Cinema” and “Romanza the 20th Anniversary Edition”.

„Cinema” comprises some of the collections of songs from known movies (“Doctor Zhivago”, “Love Story”, “The Godfather”, “Life is Beautiful”, “Gladiator”, “The Postman”, “Breakfast at Tiffany’s”) and from musicals (“West Side Story” and “Evita”).

A special edition of „Romanza” was launched this autumn to celebrate 20 years from the initial launch. The album was considered the most successful and the best seller of Bocelli. The anniversary edition comprises also the versions of the songs Vivere, Vivo Per Lei, Miserere and Romanza.

Bocelli has over 80 million sold albums (13 studio albums, 2 compilations and 8 opera albums) and a star on the Celebrities Street from Hollywood. He was named among the 50 most beautiful people worldwide by People magazine in 1998.