Anca Jurma, head of the DNA: The fight against corruption will remain strong 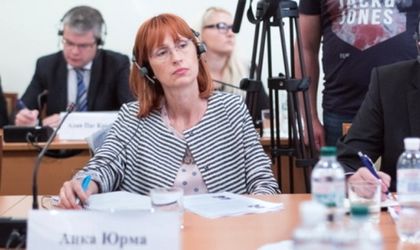 The anti-corruption fight will continue vigorously, General Prosecutor Augustin Lazar said on Thursday, adding that the interim prosecutor-in-charge of the National Anti-corruption Division (DNA), Anca Jurma, is the right person to lead this institution.

“Today, at the DNA headquarters, the interim chief prosecutor was set up, which will function until a new Chief Prosecutor is established, when the procedure started. Anca Jurma was delegated to the post of chief prosecutor of the DNA for an interim period.

On this occasion, Lazar said the anti-corruption fight will continue “firmly”.

“I would like to recall some of the priorities of the Public Ministry and the DNA. In Romania, the anti-corruption fight will continue vigorously, and the second priority – the application of anti-corruption legislation – will continue to be carried out in accordance with the international standards and defense of human rights. The DNA will use its resources, human resources, professional expertise, which have made this Directorate one of the institutions known at European level as providing expertise in the field,” said Lazar.

“Chief Prosecutor Anca Jurma is just the right person. Someone who enjoys internal and international trust is exactly what we need at this moment,” said the General Prosecutor.

“DNA has a major responsibility in fulfilling the mandate offered by the law: fighting corruption. DNA must remain a strong, independent and relevant institution as long as Romania continues to face corruption. I am committed to have a balanced interim and I will continue with my colleagues the fight that the DNA started 15 years ago,” said Anca Jurma on taking over the interim mandate.