Analysis. What to expect from Romania at Rio 2016 Olympic Games 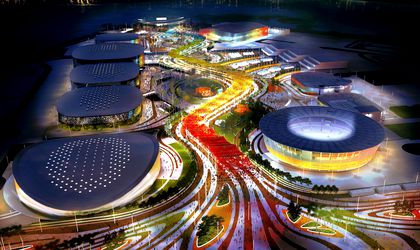 In more than a century of Olympics, during which Romania has participated in 19 Summer Olympics, and 20 Winter Games, the country’s haul stands at 302 medals: 88 golds, 94 silvers, and 120 bronzes. Its traditional sports are athletics, boxing, canoeing, fencing, gymnastics, Greco-Roman wrestling, judo, kayaking, shooting, swimming and weightlifting. So what will Rio 2016 bring?

A delegation of 104 Romanian athletes is readying itself to head to Brazil for the Summer Olympic Games which will take place between August 5 and 21 in Rio de Janiero. Romania will participate in 16 sports: artistic gymnastics, athletics, boxing, canoeing, sprint, road cycling, fencing, handball, judo, rhythmic gymnastics, rowing, shooting, swimming, table tennis, weightlifting and wrestling.The final number of local participants hangs in the balance, while by the time Business Review went to press, four more athletes could go to Rio to complete the athletics’ team.

The first Romanian Olympic medal was won by the national rugby team, a bronze at the Summer Olympics in Paris in 1924. Romania’s high water mark came in Los Angeles, in 1984, when the team won 53 medals (20 golds, 16 silvers and 17 bronzes).

But expectations for Rio are not so high. Both Elisabeta Lipa, minister of Youth and Sports, and Alin Petrache, president of the Romanian Olympic and Sports Committee, are betting on a tally of six to seven medals, especially in handball and fencing, where local teams are world leaders.

Furthermore, for the first time in history, the country that made the perfect ten in gymnastics world famous will not be sending a gymnastics squad to the Olympics. Romanian women will not only not challenge for a medal in the team and all-around competition at the Games, they won’t be represented in these competitions at all. There were high expectation for Rio, especially in the context of the 40th anniversary of Nadia Comaneci’s historic perfect ten that ushered in the golden era of gymnastics and created Romania’s most successful Olympic legacy, but bad luck and senior athletes’ medical problems meant it was not to be. Romanian gymnastics will be represented only at individual level by three-time Olympic champion Catalina Ponor, four-time Olympic medalist Marian Dragulescu and Andrei Muntean, who was recently added to the list. Two-time world all-around medalist Larisa Iordache has been promised a trip to Rio de Janeiro as an alternate.

Ponor was selected as the flag bearer, marking a first in the history of Romanian Olympics, as no gymnast has previously had the honor.

Lia Manoliu, the only woman to have led the Olympic Committee in Romania, is a popular figure both nationally and internationally. She won a gold medal at the Summer Olympics in Mexico (1968), and bronze at the Summer Olympics in Rome (1960) and Tokyo (1964) in discus, and participated in six consecutive Olympics (from Helsinki in 1952, to Munich in 1972), earning her the Guinness World Record for the longest continuous participation.

At the 1952 Summer Olympics, Iosif Sarbu became the first Romanian Olympic champion, in shooting. The first local woman champion was Iolanda Balas in the high jump, a distinction achieved at the 1960 Summer Olympics in Rome. Balas was also the first sportswoman in Romania to win a gold medal in two consecutive Olympics (Rome and Tokyo, four years later). At the 1968 Winter Olympics in Grenoble, the bobsleigh team composed of Ion Panturu and Nicolae Neagoe won bronze, Romania’s only medal in its winter sports history.

Another living legend is sprint canoeist Ivan Patzaichin who, in Munich in 1972, finished the qualification series with a broken paddle. Having competed in five Olympics, he is a four-time gold medalist, being dubbed “the admiral of the Romanian fleet”.

In Montreal in 1976, Nadia Comaneci achieved perfection and crowned a golden era for world gymnastics, notching up the first perfect ten in the history of the sport.

Another role model is Elisabeta Lipa, currently the minister of youth and sports, who took part in six consecutive Olympics. The holder of five Olympic titles, Lipa was declared the “best rower of the 20th century” by the Canoeing International Federation.

With local gymnastics fans still reeling from the national women’s team’s failure to qualify for the Olympic Games in Brazil, pundits are asking what went wrong.

“Rio Olympic Arena was a cauldron of contrasting emotions this Sunday (17 April), as thousands of spectators cheered on the Brazilian women’s artistic gymnastics team to first place and Olympic qualification but watched in disbelief as traditional powerhouse Romania crashed out. (…) It was a very different story for the Romanian team, who left the arena in tears without talking to the media. For a team that has won a medal at every Olympic Games since 1976, it was a difficult blow to take. The Romanians were unable to recover from a poor performance on the bars despite the best efforts of five-time Olympic medallist Catalina Ponor”, was the official take on the Rio 2016 news portal. The Guardian headline “Romania’s Olympic gymnastics failure: where did it all go wrong?”, USA Today’s “Romania fails to qualify full team in women’s gymnastics for Rio Olympics” and the Daily Mail’s “Gymnastics – Romania fail to make Rio Olympics team cut” were the talk of news outlets around the world. After four decades of Olympic glory, the Romanian women’s gymnastics team will not be at the Summer Games in Rio. The team — which has medaled in every Olympics since 1976 — missed the top four in a test event back in April.

The first event was the uneven bars, considered one of the weaknesses for the team across the board. Diana Bulimar, one of the stars, fell. On the beam, where Romania has fared well, there were two falls. The poor performance continued on the floor and vault. The inevitable happened: Romania failed to make the top four. In the past, the team would not even have been attempting to qualify for the Olympics right before the competition: its place was already secured in the previous championships by dint of ranking in the top eight countries.

But the writing has been on the wall. For the past couple of years, serious errors, along with weak performances in Romania’s traditional strong suits, the floor and vault, have seen the team plummet down the standings. The rot set in back in 2010, when for the first time ever, the team failed to medal. Legendary coaches Octavian Bellu and Mariana Bitang were brought back, but the damage was already underway. And what is worse, international critics say the Romanians are unlikely to return to their place in the sport’s higher echelons.

The team was made up of Diana Bulimar, Maria Holbura, Anamaria Ocolisan, Catalina Ponor, Dora Vulcan and Silvia Zarzu. The top Romanian gymnast of the moment, Larisa Iordache, couldn’t compete in Rio due to a broken finger. Iordache, who won bronze in the individual competition of the World Championship last year, will not be at the Olympics. The men’s team also failed to qualify. They finished the tournament in fifth place, after Germany, France, Ukraine, and the Netherlands. However, Marian Dragulescu will represent Romania in the men’s gymnastics as he had already qualified individually.

Who is to blame? The Guardian thinks that other countries have simply upped their game: “As Romania’s star has fallen, new countries have risen to take its place. In 2015, Great Britain won its first ever team medal – a bronze – at the world championships. (…) Italy has placed as high as fourth in the past. And the Netherlands will be sending its first full team to the Olympics since 1976 by virtue of their eighth place finish in 2015. McCharles (e.n.: Rick McCharles, a former Canadian judge and coach) conceded that the 2016 Olympics will probably not be as exciting without Romania. (…) “When new nations challenge USA, China, and Russia, we’ll be able to move on to the new normal,” he said. Forty years after Nadia, the ‘new normal’ has started – an Olympic Games without Romanian gymnastics”.

Across all sporting disciplines in Romania, the national women’s handball team was the first to make it through to the 2016 Olympic Games in Rio. In March, Romania ended the pre-Olympic qualifying tournament at the top of its group. From Europe, Russia, Sweden, the Netherlands and France also qualified, alongside world champions Norway.

The team is thought to stand a real chance of reaching the Olympic podium. At the World Championship in December, in Denmark, the Romanian women’s handball team walked away with a bronze medal. With no fewer than 63 goals on her record sheet, Cristina Neagu was the World Championship’s top scorer, and was also named the competition’s best player. This generation of Romanian women handball players is held by many to be the best in the last 50 years. “If we take a look at the Romanian national team’s results, today’s team is only matched by the lineup who won the world title in 1962. However, we should say that in Rio, Cristina Neagu and her teammates stand a real chance of winning the first Olympic medal for Romanian women’s handball. So far the Romanian national squad’s career-best at the Olympics was the fourth place they grabbed in Montreal in 1976,” reported Radio Romania International.

The last time the country’s women’s handball team competed at the Olympics was in 2008, when they finished seventh.

In January, a row erupted following a national basketball competition, when two Romanian teams – Sepsi, the women’s team based in Sfantu Gheorghe, Covasna county, a former Hungarian region, and U Cluj, the women’s team in Cluj-Napoca – became embroiled in a major misunderstanding over national symbols such as flag and anthem. Sepsi’s fans sang the Szecklerland anthem, in the Hungarian language, immediately after the Romanian anthem, when U Cluj players had already gone to warm up.

Romanian laws do not permit the singing of the national anthem before domestic competitions, meaning that both teams broke the rules. Elisabeta Lipa, minister of youth and sports, reported the issue, but the Romanian Basketball Federation dismissed it.

Following the row, PSD party members Liviu Dragnea, Florin Iordache, Marian Neacşu, Florin-Costin Paslaru, Valeriu Zgonea, Mihai Fifor and Gabriela Firea proposed a draft bill to complete the article 10 of Law no. 75/1994 regarding the flying of the Romanian flag, the national anthem and the use of Romanian emblems by public authorities and institutions. They want to make the national anthem mandatory in stadiums and sports centers, in official sports competitions and in the national final stages for all categories. The draft bill has so far been approved by the Legal, Appointments, Discipline, Immunities and Validations Committee.