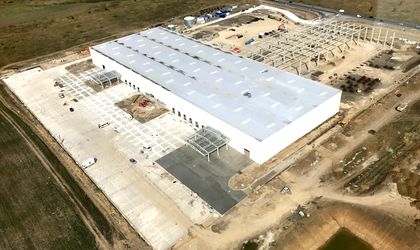 A record level of over 300,000 sqm of logistics & industrial space was leased in the first half of 2017, according to data from real estate consultancy Cushman & Wakefield Echinox.  JLL Romania estimates the figure at over 350,000 sqm, which makes it 54 percent higher than the same period a year ago.

New demand – meaning expansions or new leasing contracts – was up by 51 percent in the first six months of 2017, and represented about 65 percent of the overall leasing activity, indicate JLL data.

“Demand on the industrial & logistics market has surpassed our estimations, given that first semester leasing activity is higher than the level we were expecting for the entire 2017. Should the same growth rate be maintained, we could witness demand hitting a new record high,” says Costin Banica, associate director and head of the industrial agency at JLL Romania. By comparison, companies leased 460,000 sqm of industrial & logistics space last year, which back then was an all-time high, he adds.

Retailers and logistics companies were the main tenants driving up demand, accounting for 65 percent of leasing activity in H1. “Manufacturing is gaining ground with a 22 percent share, yet many companies here opt to build their own facilities,” say JLL representatives.

“The local industrial & logistics market is going through an effervescent development phase in term of both demand and supply. This year has maintained 2016’s upward trend, establishing new record levels for deliveries and leasing transactions. We are confident that this trend will be maintained for the next two to three years,” says Rodica Tarcavu, partner, industrial agency, at Cushman & Wakefield Echinox.

Throughout 2016, more than 370,000 sqm of industrial & logistics space was completed across the country, marking the highest level of new supply recorded so far, say C&W Echinox representatives. This year, however, the level of new supply is forecasted to be 25 percent higher than in 2016, given that more than 450,000 sqm of industrial & logistics space is scheduled for completion. In H1 2017, approximately 80,000 sqm was delivered. Some 56 percent of this year’s stock will be delivered in Bucharest and 14 percent in Timisoara, followed by Pitesti (9 percent), Cluj (5 percent), and Ploiesti and Sibiu (each with a 2 percent share), they add.

Overall, the stock of industrial & logistics space reached 2.65 million sqm at the end of H1 2017, according to C&W Echinox data. The most developed market in the country remains Bucharest, accounting for approximately 45 percent of the total stock. Outside Bucharest, Timisoara has a share of approximately 12 percent of the total existing stock, followed by Ploiesti, with 10 percent, and the area around Cluj-Napoca area, with 8 percent.

Given that new demand for industrial & logistics was three times higher than the volume of new deliveries already leased, average vacancy rates remain very low, say JLL representatives. The vacancy rate for industrial & logistics spaces in Romania reached 4 percent at the end of H1 2017, indicate C&W Echinox data. In Bucharest, the vacancy rate dropped to 3 percent, with approximately 31,000 sqm available. Prime headline rents for A-class units range from EUR 3.75-4.25/sqm/month, while effective net rents are around EUR 3.45-3.9/sqm/month, depending on the city, area and technical specifications, according to the same source.

The main player on the Romanian logistics & industrial space market remains Czech real estate company CTP. The developer has reached a portfolio of about 600,000 sqm after having pursued an aggressive takeover policy for the past two years. It is followed by P3 with a 430,000 sqm portfolio. Belgian WDP is the third largest player on the local industrial & logistics market, followed by another Belgian firm Alinso, with a 160,000 sqm park in Ploiesti, Logicor with about 150,000 sqm and Olympian and VGP each with portfolios of approximately 100,000 sqm, according to C&W Echinox data.